The Economics of Tiger Parenting

When my daughter Anna was 7, she told me she?desperately wanted a dog.? I looked her in the eye and said, “You can have a dog if you publish an article in an academic peer-reviewed journal.”? I wasn’t kidding.?? I really, really didn’t want a dog because I thought it would disrupt our family routine, which included large dollops of what Amy Chua‘s controversial new book, Battle Hymn of the Tiger Mother, refers to as?Tiger parenting. (Full disclosure: I am a friend and colleague of Amy Chua.? Her book had me in tears at times. I predict that it will be made into a movie – after several weeks on the bestseller list.)
But I was willing to put up with the disruption if Anna was willing to do something extraordinary.? So, for the next year-and-a-half, I worked hard with Anna and her brother, Henry — first in teaching them statistics and then in co-authoring a study based on survey data the kids collected concerning perceptions about the variability of women’s height.? (BTW, we found that the response rate is very high when an 8-year-old asks you “Would you answer four questions for a Snickers bar?”)? One of my happiest days as an academic was when?the study was accepted for publication by Chance, a Journal of the American Statistical Association.
As I write this, our beloved family dog, Cheby (who is named for the mathematician that discovered Chebychev‘s inequality), is lying at my feet.
But several months before Chance accepted the article, I was almost as proud of Anna for a choice she made to submit the article to another journal.? I explained to her that we could only submit to one journal at a time and that we had a choice between a really fancy journal (Scientific American) where we would have a smaller probability of acceptance, and a less fancy journal (Chance) where we would have a higher probability of acceptance.? We could try for the fancier journal first, but that might put off for a few more months the acquisition of Anna’s much-desired dog.? Anna considered for only a moment and? said, “Let’s try for the fancy? journal.”
This choice made me proud because I want my children to be willing to delay gratification in exchange for probabilistically greater future rewards.? When it comes to human capital, I want them to have low discount rates.? One of the most foundational aspects of a person’s utility function is the?intertemporal marginal rate of substitution, the willingness to forego current consumption in order to consume more in the future.? If you (highly) discount future rewards, you’re less likely to be willing to invest in human capital; why give up leisure/consumption today for something in the future about which you don’t care very much?
Of course, if your discount rate is too low, you will sacrifice most of today’s pleasures for the prospect of even modestly greater rewards in the future.? I want my kids’ discount rate to be low, but I don’t want it to be zero.? I don’t want them to sacrifice all of today’s pleasures for some future pie in the sky.
So, here’s a bleg for Freaknation: If you had to choose your child’s discount rate, what number would you choose, and why?? How much pleasure would you want them to sacrifice now in exchange for more pleasure in the future?? How low would you go?
True Grit
One way to avoid the question is to reconceptualize the issue as being about teaching?skills instead of instilling?preferences. A growing group of social scientists are studying whether it is possible for parents to teach the skills of perseverance and conscientiousness.? There is even a grit scale — based on a 17-item survey that asks you to rank from 1-5 how strongly you agree with statements like “I finish whatever I begin” and “I have achieved a goal that took years of work.”
James Heckman and a large cast of co-authors are?amassing a variety of evidence indicating that these gritty skills can be as or even more important than IQ in predicting future professional success.
Barry Nalebuff and I?have written about?a study of coding speed by Carmit Segal that relates a measure of conscientiousness to future income.? Here are the instructions for a test that the Bureau of Labor Statistics started giving back in 1979 to 12,700 individuals between the ages of 14 and 22: 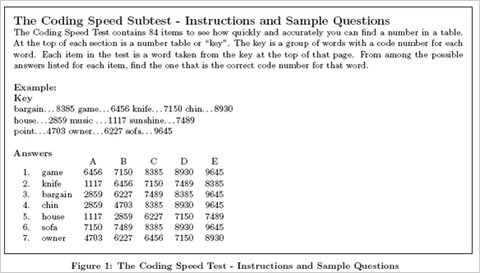 To answer a question, all a subject needed to do was look up the word in the code book and check off the correct letter – 1A, 2C, 3D, 4A, etc.? As Barry and I wrote, “Taken at face value this has to be one of the dumbest tests ever devised. If you can read, then you can find the answers. . . . [But] Segal’s surprising result is that coding performance predicts income years later — even after controlling for IQ score. In fact, for participants who never earned a college degree, coding speed is just as important as IQ score in predicting income.? If you couldn’t stop yourself from compulsively working through all seven sample questions, Segal’s study suggests you may have better life chances.?”
Segal’s result is consonant with the Marshmallow test that I wrote about in?Carrots and Sticks:

For six years at the Bing School near Stanford University, [Walter] Mischel and his colleagues asked hundreds of 4-year-olds to make a simple choice.? Children were escorted individually into an experimental room and were seated at a table on which there was a bell.? Each child was shown two plates – one plate had on it one small marshmallow, the other plate had on it two small marshmallows.? The experimenter then told the child that she or he had to go out of the room but that “If you wait until I come back, you can have two marshmallows. If you don’t want to wait you can ring the bell and bring me back any time you want to. But if you ring the bell early, you can only have one marshmallow.”? The experimenter then left the room, leaving the one marshmallow plate on the table in front of the child.? The experimenter then recorded when the child rang the bell or ate the marshmallow.? If the child held out for 15 minutes, the experimenter returned and gave the child the doubled reward.
Few of the children were able to wait 15 minutes.? On average, they lasted just over six minutes.? But there was substantial variation among the children.? More than a quarter caved in less than two minutes.? And another 25 percent lasted more than ten minutes.? Now you might think that this variation doesn’t signal any deep difference in the children’s impatience.? The study didn’t control for the children’s blood sugar.? Maybe kids who skipped breakfast that morning were more likely to grab the marshmallow in the hand.? But Mischel and his coauthors found that this crude experiment on delayed gratification in 4-year-olds predicted how the children would do many years later on their SATs.

I estimated from the published study that 4-year-olds who waited 5 minutes longer scored on average?more than a 100 points higher on their SATs a decade after the initial marshmallow choice.
Mischel and his coauthors were quick to emphasize that they don’t know whether the skill of patience is a byproduct of nature or nurture.? But they leave open as a possibility the idea that?grit can be taught.

[A]an early family environment in which self-imposed delay is encouraged and modeled also may nurture other types of behavior that facilitate the acquisition of social and cognitive skills, study habits, or attitudes which may be associated with obtaining higher scores on the SAT . . . .

The?KIPP schools have taken this possibility to heart.? At the?KIPP academy gift shop you can even buy a t-shirt with the exhortation “Don’t Eat the Marshmallow.” I worry that this t-shirt metaphorically suggests a kind of delayed gratification that is too extreme for my taste. Are they really suggesting that you shouldn’t ever eat the marshmallow? I want my kids to eat a few along life’s path.
The Greatest Value of Suzuki
The importance of perseverance suggested by these studies is the biggest reason I am attracted to aspects of Amy Chua’s memoir,?The Battle Hymn of the Tiger Mother.? Perseverance also suggests what may be the greatest value of the Suzuki method of musical instruction — about which Chua writes in detail.? Kids who learn the skill of being able to concentrate on a piece of sheet music for hours on end are more likely to be able to concentrate on other pieces of paper and other tasks that require their sustained attention.
I don’t think the value of Suzuki lies primarily in teaching musical skills.? A vanishingly small proportion of Suzuki violinists pick up their instruments after college.? Of course, Suzuki also teaches music theory and about classical music itself.? But I’m skeptical about whether this benefit in heightened musical appreciation would pass a cost/benefit test, even with a low discount rate to justify the hours that students and parents spend in practice.? Instead, the greatest value of Suzuki to me is that it teaches kids how to buckle down.? Chua says that Tiger parents often know that with hard work, kids can accomplish more than the kids thought they could accomplish.? It is an important life lesson for kids to see that through concentrated perseverance they can go from non-mastery to mastery.?? This is a trait that will stand them in good stead in a wide variety of endeavors.? (A secondary Suzuki benefit is that it gets kids over performance anxiety.? Suzuki kids are constantly performing — for their parents, for their teachers, in group lessons and in recitals.)
Chua rejects the idea that Tiger parents are similar to sports parents who facilitate their kids’ extended practice and mastery of sports skills.? But I disagree with Chua on this; I’m more drawn to the idea that starting your kids down the road toward spending?the 10,000 hours to master just about any endeavor is likely to pay Marshmallow benefits even outside that area of specialization.? My personal bias is in guiding my children toward endeavors (like learning statistics or US History or corporate finance or Python — all subjects of daddy school) that I think are likely to pay higher direct adult dividends than music or sport skills that atrophy in adulthood.
When President Obama’s mother got him up at 4:30 in the morning to go through his school work, she was teaching him a larger lesson about the value of hard work — even though it was?“no picnic” for her.? I was not quite that hard core.? But I too woke my young kids early in the morning for 45-minutes of “daddy school” before each school day and extended daddy school hours on Saturdays and in the summer. (Like Chua, I have burdened my exasperated relatives during vacations when I would insist that making time for “daddy school” was non-negotiable.)
In some ways, Chua’s book is an extended disquisition on an attempt at using extrinsic incentives to try to instill intrinsic motivations.? If a commitment device is something that “takes choice off the table,” then Amy Chua herself was the mother of all commitment devices.? Amy made sure her kids stuck with her plan.? She makes a strong argument that parents often have better information than their children about what their children can accomplish with hard work.? Parents can use this informational advantage to push their kids to attainments that kids themselves could not imagine.? As Chua says, “there’s nothing better for building confidence than learning you can do something you thought you couldn’t.”