Readers of this blog may be surprised to learn that in 2005 I coauthored?an article with Jonathan Macey which made explicit predictions about the future of democratization in Egypt. In 2005, Jonathan and I wrote:

We also posit that economic reform will bring increased pressure for democratization in countries such as Egypt and Syria. For this reason, economic reform of the kind we discuss in this Article (simplifying and reducing the costs of business formation) will be a good “leading indicator” of political leaders’ real interest in implementing meaningful democratic reforms that go beyond mere public relations gimmicks.

Even more surprising, our prognostications (at least for now) are holding up remarkably well. (Warning: this post is filled with inordinate back patting — even by blogging standards.? But in this case, any credit for prescience really goes to my coauthor, who conceived and executed the vast majority of our 2005 publication.) Hosni Mubarak‘s regime did institute meaningful economic reforms — soon after our article was published.? And as the world has seen, the Mubarak’s regime did experience increased pressure for democratization.
Of course,?post hoc does not mean?propter hoc.? But, as Jon and I argue in?this Politico article, the economic reforms implemented after our article likely played a role in empowering a new entrepreneurial middle class which supported the democracy movement.? A key piece of evidence supporting our theory is Egypt’s recent economic?success. Contrary to most news reporting, the Egyptian economy has been growing at a high rate — with an average real GDP growth rate of more than six percent. 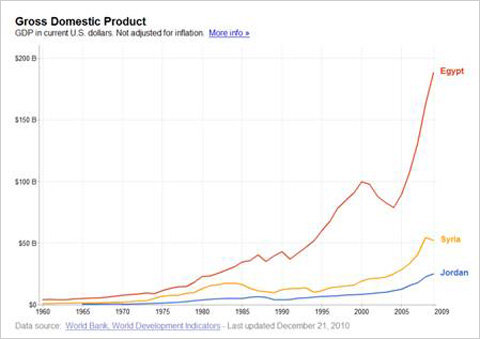 Here’s the back story to our 2005 analysis of Egypt.? Back then, Egypt made it difficult to start a new business.? The World Bank estimated that it would take 43 days and more than a dozen legal steps before an entrepreneur could incorporate and Egypt was on “the list of the 10 countries in the world with the highest minimum capital requirement for starting a business” — requiring a buy in of more than $11,000.
We attributed Egypt’s inhospitable business climate in part to the regime’s insulation from external threats.

In contrast, the ruling coalitions in Syria and Egypt, with few external threats, have weak incentives to pursue reforms likely to generate growth, and even weaker incentives to tolerate the political dissent and the democratically inclined social class that such growth is likely to generate. Consistent with this our analysis, while it is relatively cheap and simple to start a new business in Lebanon and Israel, it is costly and complex to do so in Egypt and Syria.

But we held out the possibility for change from a mixture of external and internal pressure.? We said:

Of course, we do not mean to imply that Egypt and Syria are free from pressure for political reform, despite the lack of democratic government. As a result of the recent U.S.-sponsored elections in Iraq, the entire Middle East is “bubbling with expectations for political reform.” The pressure comes both from domestic opposition groups as well as from foreign governments. The pressure on Egypt is particularly strong, since the country receives roughly $2 billion in U.S. aid annually, and has been criticized for moving slowly to enact democratic reforms. In particular, during his State of the Union address on February 2, 2005, George W. Bush suggested that “[t]he great and proud nation of Egypt, which showed the way toward peace in the Middle East, can now show the way toward democracy in the Middle East.” Shortly thereafter, on February 26, Egyptian President Hosni Mubarak unexpectedly called on that country’s Parliament to amend the Constitution to allow for direct, multiparty presidential elections for the first time in the nation’s history. President Mubarak predicted that the next president of Egypt “will be elected through direct, secret balloting, opening the opportunity for political parties to run in the presidential elections and providing guarantees that allow more than one candidate for the people to choose from with their own will.” The proposal was heralded in the press as responding both to “vocal domestic demands for increased democracy as well as stepped-up pressure from the Bush administration.”

In a footnote, we even discussed some additional evidence for why we were agnostic about whether President Mubarak at the time was serious about make meaningful reform:

During his [February 26, 2005] speech, President Mubarak did not discuss amending Article 77 of the Egyptian Constitution, which provides for an unlimited term of office for the Egyptian President. His comments were restricted to amending Article 76 of the Constitution, which deals with how presidents are selected.? Not all observers were convinced that the proposed changes are meaningful.?Id. Columnist and political analyst Ibrahim Eissa observed, “[t]his is a way [for Mubarak] to improve his image with the Americans and to please them with some formal changes . . . [w]hile at the same time he is keeping everything else unchanged, like the emergency laws, imprisoning the opposition, the state controlling the media and political parties existing just on paper. This is deception.” Ayman Nour, head of Al Ghad, a newly approved political party, was imprisoned on January 29, 2005, on allegations that he forged signatures to gain government recognition of his political party. Critics of Mubarak such as Hisham Qassim, Vice President of Al Ghad, observe that “the only credible candidate against Mubarak is lying in prison on trumped up charges.” (citations omitted).

In 2005, we suggested that Mubarak’s choice about economic reform — especially about simplifying and reducing the costs of business formation — would be a credible signal — “a good “leading indicator” — of whether he was serious about implementing meaningful democratic reforms.? Our leading indicator prediction has borne fruit.? As we wrote in?Politico:

[T]he Egyptian minimum paid-in capital requirement had dropped to about $250, and the time to incorporation is just seven days. The World Bank now ranks Egypt as the 18th easiest nation in which to start a business. The past five years were characterized by meaningful economic liberalization and economic growth – in Egypt.
No account of the Egyptian revolution should overlook this crucial point. In 2004, in the wake of the controversial presidential election, Mubarak installed a new, Cabinet-level economic team. Cairo reduced tariffs and taxes, improved transparency of the national budget, restarted stalled privatizations of public enterprises and passed economic legislation designed to reduce bureaucratic obstacles to business and foster private-sector-driven economic growth.

Economic reform has been a leading indicator of democratization.? What this means for places like Syria:

If Syria’s President Bashar al-Assad cares more about retaining power than the welfare of his people, he would be advised not to follow Mubarak’s lead in opening the door to entrepreneurial democracy.
Syria hasn’t even started down the path to economic reform. The minimum capital requirement for incorporating a new business there remains a staggering $8,500. The World Bank now ranks Syria as one of the most difficult places in the world to start a new business.

If you are a despot, unleashing entrepreneurship can be bad for your job security.