To Get America Growing Again, It's Time to Unleash Our Cities: A Guest Post by Ed Glaeser 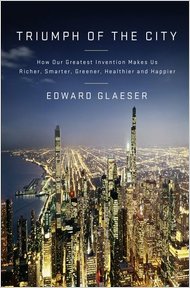 Ed Glaeser is an economist’s economist — as smart as they come, driven by empiricism, with something interesting to say about nearly anything. He has just published a new book, Triumph of the City: How Our Greatest Invention Makes Us Richer, Smarter, Greener, Healthier, and Happier. Glaeser argues that cities often get a bad rap even though they are “actually the healthiest, greenest, and richest (in cultural and economic terms) places to live. New Yorkers, for instance, live longer than other Americans; heart disease and cancer rates are lower in Gotham than in the nation as a whole. More than half of America’s income is earned in twenty-two metropolitan areas. And city dwellers use, on average, 40 percent less energy than suburbanites.”
We’re pleased to offer the following guest post from Glaeser on the glory of cities. I hope you find it as enthralling as I did. For the record: Glaeser is the Fred and Eleanor Glimp Professor of Economics at Harvard; among his research topics are the economics of cities, housing, segregation, obesity, crime, and innovation. He writes regularly for the Economix blog. He is a senior fellow at the Manhattan Institute, and director of the Taubman Center for State and Local Government and the Rappaport Institute for Greater Boston.
To Get America Growing Again, It’s Time to Unleash Our Cities
By Ed Glaeser

Worries about the economy and the apparent waning of American dominance have been inescapable of late.? Whether reading about the creation of President Obama‘s Council on Jobs and Competitiveness, his State of the Union address, Hu Jintao’s state visit, general China-envy and anxiety or even Tiger Mom-induced guilt, the message seems the same:? we’re in trouble.? But sticking with China for a moment, it’s instructive to consider what’s behind its incredible development and its increase in competitiveness.? Simply put, China is urbanizing.? China’s cities take in about 17 million new people every year because places like Shenzhen and Shanghai provide a path out of rural poverty. The good news for any anxious Americans out there is that cities and productivity go together everywhere in the world — and of course that goes for the U.S.A. as well.
Cities are at the heart of a competitive and global future, but even though the evidence is all around us, and even though mounds of data stare us squarely in the face (our country would be 43 percent richer if every area was as productive as New York), we don’t seem to get it. We continue to think that economic recovery and growth means building roads to nowhere, and we hobble our cities with silly policies that advance the idea that the only American dream is a white picket fence in the suburbs.?? If we want America to start growing again, we had better unleash our cities.? And there are a few simple truths we need to acknowledge if we’re going to do? that.

The world is flat — except for the brilliant peaks that we build together in our cities.?? Let’s continue to innovate and grow our species’ greatest invention here at home.? We may rediscover a little bit of our swagger while we’re at it.