Japan's Nuclear Worry Produces, Among Other Reactions, a Salt-Buying Panic in China 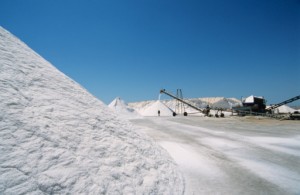 The Three Mile Island nuclear-power accident in 1979 coincided almost perfectly with the release of The China Syndrome, a Hollywood film about a nuclear meltdown. As we once wrote, this pairing helped gel American sentiment against nuclear power.
Several other nations, meanwhile, kept on building nuclear-power plants, Japan among the leaders. Now, how will the earthquake/tsunami-damaged nuclear plant in Fukushima change the way we — Americans and others — think about a nuclear future?
Matt Ridley, writing in the Wall Street Journal, has a good take on this question. He raises the salient point that…

… however high the death toll at Fukushima climbs, it is unlikely to match the casualties in the fossil-fuel industry. In the last year alone, 29 people died in a New Zealand coal mine, 11 on a Gulf oil rig and 27 in a Mexican pipeline explosion. A human-rights activist has estimated that as many as 20,000 people die in Chinese coal mines every year.*

There’s also the fact that the Fukushima plant is running a relatively ancient nuclear technology. Much has already been written lately, and much more soon will be, about how more recent designs are considered significantly safer.
That said, panic is panic is panic. Witness one response to the fear of radiation as is played out in China, from a Marketwatch report by Craig Stephen:

Last week, a salt-buying frenzy was unleashed across China that spread to Hong Kong, which quickly became a rather unsavory spectacle. Rumors had spread via the Internet from across the border that some salt contains iodine, which would provide protection from a looming radiation threat from Japan. Throngs of people began scrambling for salt, mobbing shops and wholesalers.
On Friday, the Hong Kong government had to resort to a mass text-message campaign imploring people not to believe rumors and to stop panic-buying salt. The fact you might have to eat kilos of the stuff to get sufficient iodine was of no consequence. Indeed, so chaotic was the behavior that some people were even seen bizarrely carting off bottles of soy sauce. Amid the buying, retailers reportedly raised the price of salt more than tenfold, seeing an opportunity to profit from this panic.
The whole episode has caused a certain degree of embarrassment and shame, particularly in contrast to the restrained behavior in Japan, where there is very real suffering. There the orderly and stoic lining up for water, transport and food in the middle of biblical-like devastation has shown the remarkable endurance and self-control of the Japanese people.

*In SuperFreakonomics, we cited a far lower number of Chinese coal-mining deaths per year — about 3,000. But those were derived from government statistics, which, as we wrote, are likely underestimates. That said, the human-rights activist cited by Ridley may well be overestimating.