Piers Morgan and PETA Take on GoDaddy CEO (Or the Other Way Around?) 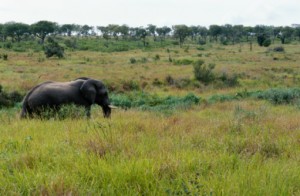 Bob Parsons, CEO and Founder of GoDaddy, faces off against Piers Morgan and PETA in a recent video. The issue is simple: Parsons went to Labola, Zimbabwe and killed an elephant, and proudly posted video and photos online. Why? Parsons claims a herd of elephants were wreaking havoc with the crops of local villagers, and that the meat from the killed elephant could feed an African village (literally). I’m guessing (although I’m not sure I care, and he does not say this) that he also is a hunter, and maybe enjoyed the process of the hunt.

The second issue naturally relies intensely on a set of tradeoffs: as with any self-generating natural resource, there is a tradeoff between depleting it and letting it grow (assuming there is a goal of keeping it in existence). Communities have tried regulating fishing for years, for just the same type of problem. The interview was clearly a fierce exchange of sound bites and “is so” with responses no more informative than “is not.” I’m entirely sure that whatever your view was going into watching that video, your view will remain the same upon finishing it.

Alas such is the story of many debates, particularly those without facts. So please tell me: are those elephants in fact going extinct, as PETA said? Or are they so plentiful as to require culling, to simply maintain a reasonable quantity of elephants without them overtaking the land?

The search for hard facts to move beyond old debates is one of the themes of a book I recently co-wrote with Jacob Appel, More Than Good Intentions. So in the spirit of the search for evidence to answer policy questions, let me offer a free giveaway: the commenter who links us to the best analysis, with data, to answer the Piers Morgan/PETA/Bob Parsons debate gets a free copy of our book. That offer goes to Piers Morgan/PETA/Bob Parsons, too, of course.

Meanwhile, one further thought. There is another argument Parsons could have made, but it probably would not have been too popular. He could point out how hypocritical we often are in how we choose which animals to go “aaawwww” over and which to go “eh, who cares” over. (Most) people halfway around the world don’t get any pleasure out of knowing that there are tons of fish off the coast of Mozambique, but they do get pleasure from knowing that there are lots of elephants roaming around. The charismatic mega-fauna, as they are often called, get far more protection than other animals, relative to their contributions to the evolutionary gene pool (at least that is what I’ve been told, remember of course I’m an economist, not an evolutionary scientist). Obviously this hypocrisy can be corrected one of two ways: we can care more about the animals we think of as boring, or we can care less about the ones that make us go ga-ga.

An extensive study was done on the subject by the Faculty of Veterinary Medicine, Utrecht University, The Netherlands in 2003.

They address various population issues (no risk of extinction in Zimbabwe), costs and time concerns involved with relocation, sterilization and culling. There is also a cost - benefit analysis done per km2 for culling.

Because of cost (>$1500.00/animal), limited financial ability and large number of animals, relocation would likely be restricted to short distances therefore of limited use.

Contraception or sterilization also seem of limited benefit because of the time required for efficacy (>10yrs.). This leaves the rather unpalatable choice of culling for a variety of reasons addressed in the study.

It is likely some combination of these choices will be necessary.

The study includes a report and conclusions found at the following URL (use the menu on the left of the page):

Your book would be nice but hopefully an acceptable solution will be found.