What Can Movie Stars Tell Us About Marriage And Education? 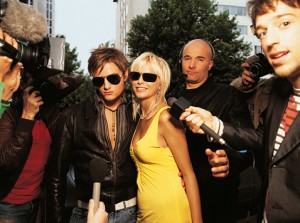 Celebrity couples: what they tell us about marital trends. (Photo: Digital Vision)

According to a study published in the Journal of Human Capital, marriages among movie stars may help unravel the mystery behind why people tend to marry partners of similar education levels.

Movie star marriages can shine light on this topic, according to Gustaf Bruze, the study’s author and an economist at the Aarhus School of Business and Social Sciences in Denmark.

Bruze assembled a large data set of top movie stars’ marriages, earnings, and education levels, and found that level of formal education has no correlation with a movie star’s success, either in terms of box office earnings or the likelihood of winning an Oscar. Yet despite the disconnect between education and success, Bruze’s analysis shows that movie stars who marry each other still tend to have similar educational backgrounds. His data also shows that actors are unlikely to meet their spouses in school, or be cast together in movies due to their education level.

The findings suggest that sorting on education isn’t all about the money or solely an artifact of professional affiliations. According to Bruze:

"What can movie stars tell us about marriage and education?" That neither is terribly important any longer.

I'd say (from a pure conjecture point of view) it probably has a lot to do with communication. Communication is foundational in a quality relationship, and it is much easier for people of similar educational backgrounds to communicate effectively with each other.

"Or it could just be that people with similar education levels tend to interact more with each other, at school and at work"

I would imagine this accounts for most of the correlation. Historically, proximity is the best predictor of romantic involvement.

This has probably already been examined in the research, but I would expect that men and women have a preference for spouses who match their level of intelligence. Since education and IQ are correlated, we see a tendency for spouses to have similar education levels.

Oh, yeah, it's all about proximity, all the way. And communication, of course. Which directly relates to anyone's education, what they have had a chance to be exposed to regulates what they can actually have a conversation about, theoretically true. Specifically however, proximity, for sure. And then we start to learn about how relative proximity is, when the initially closer person(s) who are all five seconds to minutes to ten minutes to an hour away from you have absolutely NO idea what you are talking about sitting two feet across the same table. There's an entire WORLD's difference of distance in the one minute between you and that gorgeous person sitting in the same room. Sure. There is a scientific explanation for this. And lots of questions like, why does the physical world start to feel smaller and smaller when in my brain you make me feel fathoms away? Distance speaking, finding someone on the other side of the world that may want to communicate about the same things, and engage in the same topics of 'educational' or whatever you want to call it conversation, all of the sudden makes proximity and the relativity all start to make sense!
We're talking about Movie Stars? Whatever! :)

maybe they're just looking for commonality just to the point of comfort, that keeps them connected, more than earning or education

God forbid anyone would want someone intelligent enough to connect with them where they are and yet also be able to spur them on to new heights for actual progress in life, as a team. I mean, that would actually be engaging. har har

If this is true, then James Franco is going to be a lonely man.

From there though, it's pretty important that the person is interesting to talk to. Well for marriage anyways ;)