Did the Sale of Pyrex Hurt the Crack-Cocaine Industry? 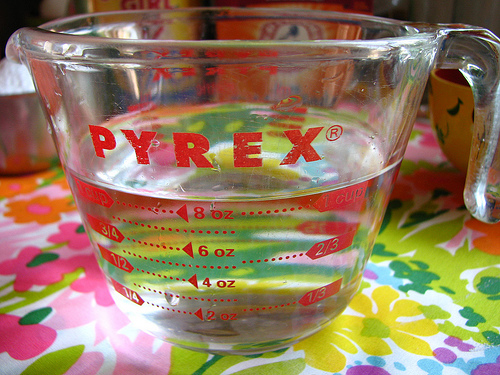 Photo: jek in the box

We’ve written a lot about the economics of drugs, both legal and illegal. There’s an interesting article in Popular Science about Pyrex bake ware, crack cocaine, and the unintended consequences of reducing a product’s quality.
Pyrex is valued by cooks for its sturdiness in the kitchen, particularly its ability to withstand rapid, dramatic temperature changes that typically shatter normal glassware. It turns out that people making crack cocaine valued this quality too. The process of cooking powder cocaine into hardened crack is intense, and involves a container of water undergoing a rapid temperature change. For years, Pyrex measuring cups, manufactured by Corning, were a key component of the underground crack industry.
But Corning sold Pyrex in 1998 to World Kitchen, which altered the makeup of the Pyrex material, making it less resistant to temperature changes and more prone to shattering. This, points out the Popular Science article, had a substantial impact on crack production:

[A]n entire underground industry was forced to switch from measuring cups purchased at Walmart to test tubes and beakers stolen from labs. Which just goes to show, if you think you know all the consequences of your decisions today, you’re probably wrong.