Talk Derby to Me: The Private Regulation of Roller Derby Names 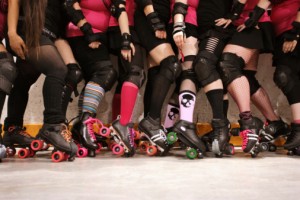 Trademarks are so significant in our economy that many firms and individuals register any mark they think may prove valuable.  Warner Bros. has trademarked dozens of uses of the term “Quidditch” (the magical flying sport from Harry Potter), including “Quidditch lingerie.” The producers of The Simpsons have trademarked Homer’s familiar “D’oh!” Paris Hilton has trademarked “That’s hot!” And a few women have trademarked the names they use when they play roller derby – which is having a major comeback in cities all over the nation.
Trademarked derby girl (their preferred moniker) “skate names” include Amber Alert, Anna Notherthing, Busta Armov, Felon D. Generous, and Ivanna S. Pankin. But the vast majority of the thousands of U.S.-based derby girls have not trademarked their names. And yet nearly all skate names are unique: there is only one Hell O’Kittie, though there are doubtless many derby girls who wish they had that name. If the names are valuable, why don’t more of them use trademarks?
A new paper by David Fagundes explains. Rather than use trademark law, derby girls have instead developed a strong private system of name ownership. At its heart is the Master Roster, a privately-administered list of skate names, which is searchable online. See for yourself. The Master Roster functions as a sort of private trademark registry, where registration is equivalent to a right of exclusive use.  And the social norms that accompany it allow the Master Roster to stand in for legal protection.
The result is a cheap and efficient system of private regulation. Fagundes describes how the system works:

Three core principles govern derby-name regulation. First is a uniqueness requirement: Only one skater can skate under a given name. The second instantiates the idea of priority: Where two names are identical or excessively similar, the skater with the earlier claim to the name has the right to use it. The third creates elemental standards for resolving overlapping name conflicts: Where two names are reasonably similar, the second skater must ask the first skater for permission to use the name. This permission must be in writing and submitted to the Master Roster‘s administrators in order to authenticate it. Names that are very similar to preexisting names but that have been approved via written permission by the senior skater are listed on the Master Roster with the note “(cleared)”.

Enforcement is mostly done via personal contact between skaters, backed by the threat of social disapproval by other skaters. As Fagundes explains, membership in the skating community is a central value for most derby girls. The result is widespread compliance with the Roster system. But, in the few cases that reputational sanctions and shaming don’t work, there’s always violence.  Violence is a pretty credible sanction in roller derby because the sport itself is violent, and thus retaliation can be disguised within the normal flow of a derby bout. As a couple derby girls put it:

“[T]here‘s no laws in place – you don‘t even have to register your derby name – it‘s COURTESY. Ref might not see you smash me in the face – but I know, and trust me baby, I‘m comin for ya.”  Added another, “I totally agree with the not stealing/copying of names… Someone once said imitation was the best form of flattery… So flatter me and then let me kick your a$$ (sic).”

So why don’t derby girls trademark their valuable skate names? Because they have created a stable system of private order that functions as an effective stand-in for the law—without all the legal hassle.