The Dominique Strauss-Kahn affair has been good business for many journalists and writers, but it’s caused some blowback too. Consider this IMF bloggers’ event that bit the dust: 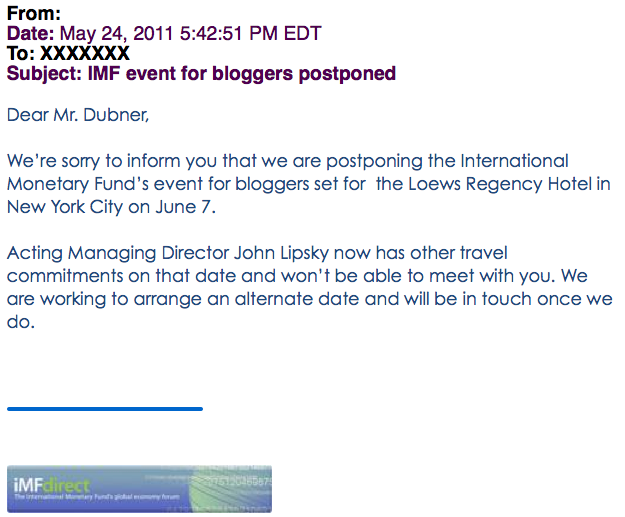 And then there’s the admiring DSK cover story in Washingtonian magazine, called “The Invisible Man.” From the Washington Examiner:

“It was actually sitting at the printer, printed, when he was arrested,” explained the publication’s editor, Garrett Graff. … “The most ironic part of this is that the reason we were writing the piece is that nobody had ever heard of this guy,” Graff said. “You could be standing next to him at the supermarket check-out line and not recognize him.”

The Examiner piece calls the timing “unfortunate indeed.” GeorgetownPatch concurs, with an article headlined “Bad Timing: The Washingtonian and DSK,” whose subhead is “Talk about bad timing in the magazine business. This one takes the cake.”

To which I say: really? I’m guessing only the article’s author and a few editors feel that way. Journalists tend to worry way too much about this kind of thing. The fact is that everybody in Washington (and beyond) is about a million times more eager to read about DSK today than they were 10 days ago, and even a mostly glowing article that was written before the scandal is bound to be more interesting — in a palimpsest-y way, if nothing else — than what’s being published today. A brief taste:

Sinclair [DSK’s wife] is a member of the Picasso Museum’s board in Paris. She and her husband bought a $4-million house in Georgetown next to Rock Creek Park. DSK’s political friends have said Sinclair bought the house—being seen as wealthy isn’t good politics in France, especially for a Socialist. But he probably could have afforded it on his own. He earns $500,000 a year at the IMF and doesn’t have to pay income tax.

On collateral damage, maybe you guys could answer a question for me. Most of the news reports have mentioned that $3K/night hotel room, but none I've seen has said who was paying for it. If it was his own money, fine, but if it was on the taxpayers' dime, isn't that worth a bit of a scandal right there?

I think with the kind of salary he was getting it's safe to assume this was a "business expense." I agree with you, though, it does make somewhat of a difference as to the outrage. In either case $3,000 per night is absolutely insane no matter what.