Road Blocks: The Strange Things That Cause Traffic

The cause of a lot of the traffic congestion we battle everyday is pretty simple: too many people want to travel at the same time in the same direction to the same place, usually a job center. Since telework has been slow to replace the traditional workplace, it looks like this problem will be with us for a while.
For decades we have known about a way to deal with chronic congestion: levy tolls which vary depending on how crowded the road is. I’ve written about this here and here.
But pricing is not as well-suited for dealing with congestion related to unusual incidents, like breakdowns and wrecks. Even when these are relatively minor, incidents can start shock waves that cause serious amounts of delay as they ripple back through the traffic flow.
It’s hard to calculate precisely, but estimates I’ve seen suggest that incidents account for perhaps 50 percent of all roadway congestion. The most common incidents (80 percent) are breakdowns, stalls, flat tires, empty gas tanks, etc. In transportation lingo these are referred to as “disablements.” Anthony Downs, in his excellent book Still Stuck in Traffic, reports that overall these tend to generate about 15-30 minutes of delay per upstream car.
But incidents get far more varied and dramatic. In a well-done Los Angeles Magazine article on the mechanics of traffic congestion, Dave Gardetta chronicles many of the things that have caused major traffic tie-ups in the Los Angeles area. First, there are the spills—not just of things like oil and antifreeze, but of oranges, lemons, and even livestock. (L.A. has seen a traffic jam due to cows running loose on the freeway.) 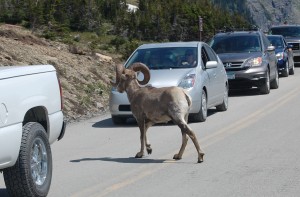 Wild deer and coyotes cause traffic snarls, and domestic animals get into the act as well. July 5 tends to have an unusual number of animal-related traffic problems, as pets, spooked by the fireworks on the previous day, have a greater propensity to wander onto freeways.
Sadly, animal-related traffic jams are not all accidental. Sometimes litters of unwanted puppies are deliberately left on freeways to be run over. The California Department of Transportation often dispatches work crews to go out and collect trash bags of dead roosters the day after cockfights.
Even worse than animals dying on the roads are people. Freeways are a popular place to end it. People jump off bridges and overpasses, or deliberately drive into other cars or off the road; the frequency of highway suicides rises around Valentine’s Day. There are also higher rates of highway-related suicide in the days following some other well-publicized suicide. All of this can halt traffic.
And then there are the homicides. Deranged individuals have been known to drop bricks, bowling balls, pieces of the coastal mountain range, and even other people off overpasses.
Less tragic but considerably galling is the use of freeways as garbage dumps. Trash of all sorts has induced traffic jams, including but not limited to couches, chairs, refrigerators, and stoves. During the last week of December, discarded Christmas trees become a serious problem on the roads.
Mother Nature plays a role too. It may come as no surprise that rain, fog or snow can slow traffic, but even the position of the sun can cause tie-ups. Idyllic Los Angeles may not have blizzards or ice storms, but ironically our good weather can cause traffic jams; on clear days when there are spectacular views of the mountains, L.A. drivers get plenty of time to admire them as traffic slows.
Then there’s road construction, which is particularly maddening in Northern cities like my native Chicago, where snow, ice and the freeze-thaw cycle degrades the roadways. (Although I might add that my preferred conspiracy theory for the endless road construction while growing up—political corruption, maybe with the mafia thrown in somehow—got a boost when Rod Blagojevich purportedly conspired to authorize billions in senseless road building in order to extort cash from contractors.)
Finally, there are accidents, either between cars, between cars and pedestrians, or between cars and stationary objects. Overall, I’m happy to report that accident rates and severity in America have been falling for decades; in a future post I’ll look at by how much and why. However, there are still a tremendous number of crashes on American roads. Downs calculates that in a city the size of Philadelphia, Dallas or Boston there are roughly 300 accidents a day, including 20 per hour during rush hours. Downs’ numbers suggest that 40 percent of accidents block traffic lanes, causing roughly 45-90 minutes of delay per vehicle upstream.
Even the 60 percent of accidents that are quickly cleared to the side of the road can cause serious tie-ups. And this isn’t because the highway is blocked, but simply due to the fact that human beings have malleable morality and a ghoulish streak. Tell the truth: have you spent an eternity stuck in a gapers’ block, cursing the twisted Schadenfreude of the rubberneckers ahead of you, only to slow down yourself to gawk at the wreck when it’s finally your turn? Maybe we figure that since everybody ahead victimized us, maintaining the cosmic balance of justice in the universe demands that we in turn victimize those to come. Or maybe we simply have a morbid need to gape at the misery of our fellow humans.
Incident-related congestion will always be with us in some form. But there are ways we can cope with it. In the future, I’ll look at some ideas that can help keep barnyard animals and Christmas trees from ruining our morning commutes any more than actually having to go to work already does.