Urban vs. Rural Minds: The Differences in Brain Behavior 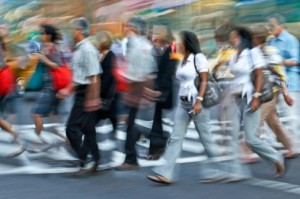 The Economist reports that city dwellers are at a significantly increased risk of developing anxiety and mood disorders. Evidence from a new study by Andreas Meyer-Lindenberg, a German psychologist, might explain why.

Urbanites, it turns out, deal with stress differently than rural residents. Meyer-Lindenberg identified a difference in the activity of the amygdalas, with those living in cities having the highest activity in this area of the brain. The amygdala is responsible for memory storage and emotional events, and scientists believe it’s also related to dealing with fear. Meyer-Lindenberg also found that people raised in cities have an off-kilter perigenual anterior cingulate cortex (pACC) amygdala link, a condition also present in schizophrenia.

But how about pigeons? Turns out urban pigeons, like urban humans, are also different: they’ve learned to exploit humans in order to maximize feeding time, but also how to discriminate against those that won’t do them any good.

The BBC reports on a French study which finds that pigeons can discriminate between a friendly human and a hostile one – even when the feeders changed appearances. The researchers said that the study is the “first experimental evidence in pigeons for this level of human discrimination.” Sounds like the urban pigeons might have learned some economics.

This explains the pigeon problems of George Costanza: http://www.dailymotion.com/video/xb1tw7_george-costanza-versus-the-pigeons_shortfilms

That is why they shouldn't feed wild animals

I suppose this sheds light on an old question, whether it's city life that drives people nuts, or it's only the nutcases who move there.

My own personal experience supports this. Left Atlanta about 15 years ago for a small town and haven't missed it for a minute. I can count on the fingers of one hand the number of traffic jams I've been in since I left there.

Urban vs. Rural Minds :s, i'm in a urban

This reminds me of a study conducted previously on the difference between country ducks and ducks bred in the city. The former were found to be more easy-going and amiable to humans, while the latter were apparently more restless and quacked louder--a trait they apparently developed so that they could be heard above the din surrounding them.

Interesting what living in the big city does for us, humans and animals alike.

"...the latter were apparently more restless and quacked louder..."

Not just louder, but incessantly, and without letting the other ducks get a quack in edgeways. Or at least that's what I'd deduce from observations of city-raised humans.