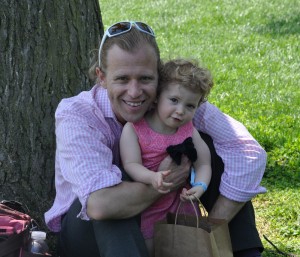 Justin Wolfers and his daughter Matilda after a White House Easter egg roll.

On Friday I speculated that perhaps becoming a parent changed how I approach economics. To broaden the discussion, I posed the following thought experiment: what kind of economists would we be if we learned our economics only after we were parents?
The always-interesting Robin Hanson responded:

I don’t need to speculate – I am exactly that kind of economist. I started econ grad school with two kids, ages 0 and 2, and had no undergrad econ… But none of that makes me doubt the value of neoclassical econ. How could it? First, econ makes sense of a complex social world by leaving important things out, on purpose – that is the point of models, to be simple enough to understand… Having an emotional parenting experience is as irrelevant to the value of neoclassical econ as having a mystical drug experience is to the validity of basic physics.

Robin is right to say that my becoming a parent changes neither the physical nor economic laws of the universe. But my point wasn’t how fatherhood changed the economy, but rather how I approach my work as an economist. An interesting email exchange followed in which we both expanded on our views. I argued:

You say that in our models we leave things out on purpose, so as to be simple enough to understand. We also try to leave in the things that are important. And I think that the things I would happily have left out while in my twenties are different from the things I would leave out today. Now that may just mean that today I’m more of a Beckerian or perhaps Akerlovian economist while my younger self was more Samuelsonian. So the relevant thought experiment for you is whether you would have been more of a Samuelsonian economist if you had gone to econ grad school before having kids.

And it turns out that we are a lot closer to agreeing after all. Here’s Robin’s response:

I fully agree that as we live longer and experience more things that are important to us, we change our ideas of what is important in life, and important to model as academics. My starting later in life probably influenced what I considered to be important topics. I’m not sure how to translate that into the categories of “Samuelsonian” “Beckerian” or “Akerlovian”, but being older I expect I put more weight on the importance of status, loyalty, identity, attachment, and signaling all such things. Those tend to be things that young folks don’t notice as much yet in their lives.

Indeed, I take Robin as Exhibit A for my hypothesis that parents-who-become-economists view the world differently than economists-who-become-parents. And the proof? Well subsequent to our conversation, Robin posted a simple theory to explain my navel-gazing:

Wolfers is usually an excellent economist, and here he seems to realize he is acting a bit loopy. This suggests a “religious” scenario, where someone tries to show devotion via a willingness to believe extreme things. Wolfers feels a new strong attachment to his family, and shows it by a willingness to change related beliefs in an extreme way. Being an economist, one of the biggest beliefs he can sacrifice on this altar is his belief in the standard economic framework. So Wolfers says that his new family attachment has made him question this framework.

I’m not going to debate whether Robin is right or wrong. Instead, I’ll simply observe that this is an essentially Akerlovian perspective on parenting as identity. Moreover, this is precisely the sort of insight that is likely to occur to parents-who-become-economists, like Robin.
Now my argument isn’t rock solid. Just as I don’t get to observe the counter-factual of what sort of economist I would have been if I had been a parent-who-became-an-economist, we don’t get to observe the counter-factual of Robin as economist-who-became-a-parent. But it does seem like an interesting thought experiment.