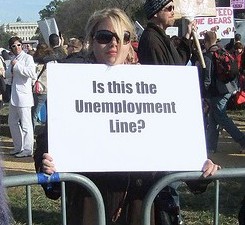 A lot of us were disappointed in the latest jobs report. Non-farm payrolls grew by only 54,000. By contrast, a good recovery requires growth of several hundred thousand jobs a month. But my dinner table conversations with Betsey helped me put it in perspective. (And yes, given her current job, this explains the somewhat political nature of this post.) Her comparison:  Through the entire eight years of the (Dubya) Bush administration, non-farm payrolls grew by an average of only 11,000 per month. OK, the Great Recession explains some of this. But not a lot. Let’s cherry-pick the most favorable sample we can, focusing on the period through to the absolute peak in employment, which occurred in January 2008. This still yields average jobs growth of only 66,000.
The point of this comparison isn’t to argue that the economy is doing well.  It isn’t. A healthy labor market adds hundreds of thousands of jobs per month, as it did under Clinton (average: +237,000); Reagan (+168,000); and Carter (+215,000), although it was also notably weak under the earlier President Bush (+54,000).
My point is that the current malaise goes back a lot longer than the current recession. Yes, the recession that began in 2007 has been a disaster. But we also produced too few jobs from 2000-2007.  Recall that this is the period in which Washington was focused on tax cuts for the rich.
UPDATE: In the comments Randall Hoven is correct to remind me that sometimes a picture is worth a thousand words.  Here’s the history of non-farm payrolls: a long upward march through time, which flattens out only over the last decade.