The Fed's Wishful (And Wrong) Thinking About Unemployment 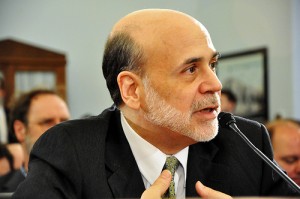 No one seems to have noticed that the Fed’s latest unemployment projections just don’t make sense.  While most economists are concerned about a jobless recovery, the Fed is forecasting lots of jobs, but little recovery. Yes, today’s projections suggest only tepid output growth in the next few years. And given this, it’s hard to see how we will make much of a dent in the unemployment rate.  Yet the Fed believes otherwise, cheerfully (wishfully?) forecasting declining unemployment.
The blue dots in the graph below show how economic growth has historically translated into changes in unemployment. The dashed line shows Okun’s law, which fits the data pretty well. This rule-of-thumb tells us two things:
1.       You need economic growth in excess of around 3% to lower the unemployment rate.
2.       If GDP grows a percentage point faster—which counts as a very optimistic forecast at the moment—then unemployment will fall by half a percentage point, from say, 9% to 8.5%. 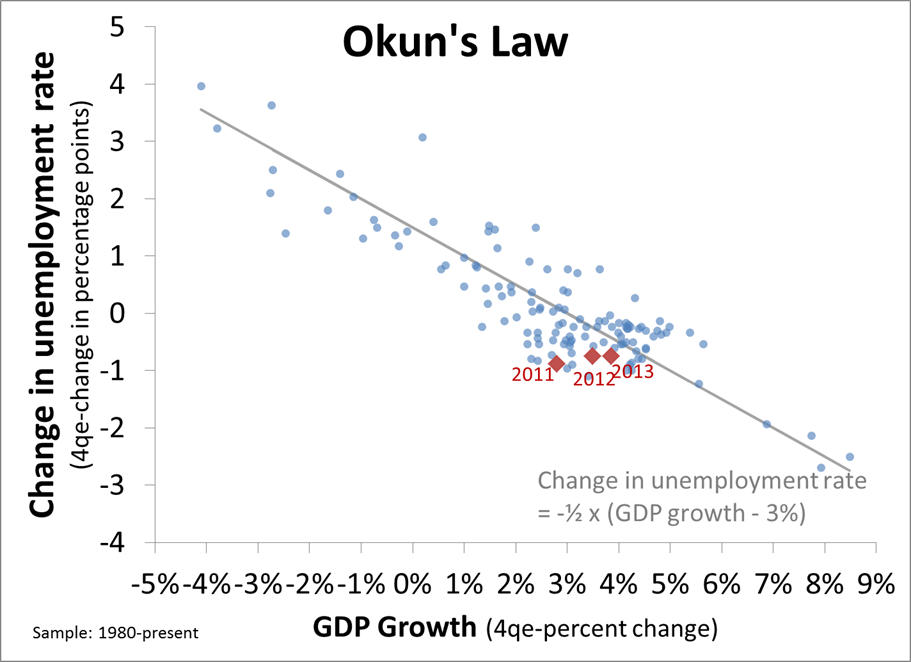 Now keep your eye on the red dots, which show the Fed’s unemployment projections. These unemployment forecasts are all more optimistic than Okun’s law suggests. That is, the Fed is projecting better news on the unemployment front than is justified by their economic growth forecast. More tellingly, the red dots showing the Fed forecasts are all close to the bottom of the data cloud, which means that it will be quite unusual to see the labor market perform so well, given their projections for only moderate economic growth.
All told, the Fed is projecting GDP growth to average 3.4% over the three years to December 2013. Plugging that into Okun’s Law suggests that it is reasonable to expect unemployment to fall by the end of 2013, but only by around half a point (or 0.4%*3 years *0.5 Okun coefficient = 0.6 percentage points).  Instead, the Fed is projecting the unemployment rate to fall by nearly two full percentage points.
Obviously there are a million caveats that come with any forecast. The Fed could end up being right here, but if history is any guide, it seems unlikely. Their key risk is that they’re too optimistic about the prospects for reducing unemployment anytime soon.
Bottom line? The Fed’s output forecasts combined with Okun’s law suggests that there’s real reason to be concerned that by early 2014, the unemployment rate may still be as high as 8.5%. If so, we’ll have nothing to show for our lost decade but a sick economy.
And yes, the usual disclaimer applies.