The Rich vs Poor Debate: Are Kids Normal or Inferior Goods?

Are you likely to have more kids if you are rich or poor?  Or to put this in econo-jargon: Are kids normal or inferior goods?  (Reminder: When you get rich you buy more of a “normal good,” and less of an “inferior good.” And yes, the language of economics can be a bit cold.)
This is a question that’s central to a debate between Betsey Stevenson and Bryan Caplan. Recall, Bryan is the guy who argues that having kids needn’t be as expensive or time-consuming as we make them. Fair enough. But he then makes the leap to arguing that we should all have more kids. In her response, Betsey noted:

Caplan is entirely focused on the substitution effect: having kids becomes cheaper relative to buying TVs. So he says buy more kids, and fewer TVs. But what about the income effect? As people become richer, they tend to “buy” fewer children, not more. So there’s an offsetting income effect.

In a follow-up, Bryan runs some regressions that he thinks suggest that Betsey is wrong to say that the rich have fewer kids than the poor. It’s a brave person who debates Betsey on the data. And I think he’s tying himself in regression knots, rather than getting at the issue.
Let’s focus on the big picture. Here’s a Gapminder plot showing that those of us born in rich countries have fewer kids than those born in poor countries: 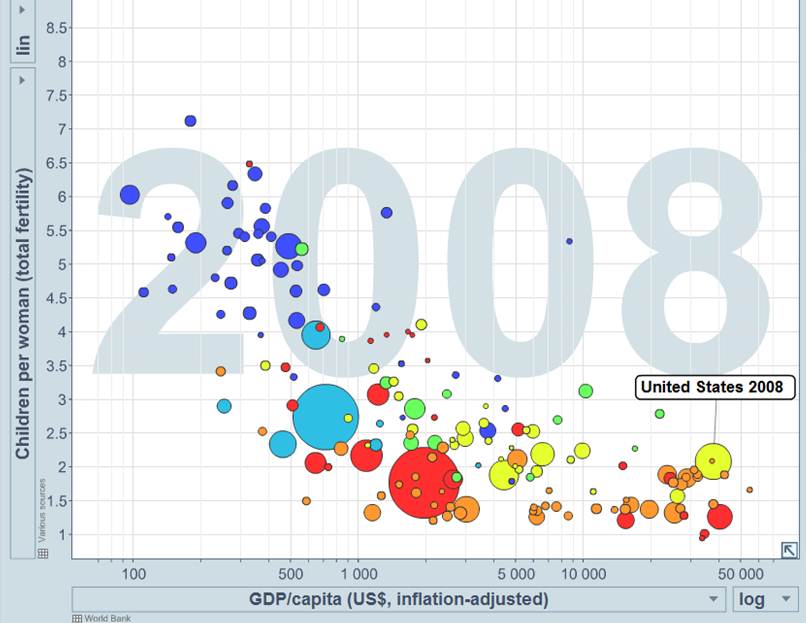 Or we could look at the time series evidence. Gapminder lets me trace fertility and income for each country since 1960.  The plot below shows that as the U.S., China, India and the Asian tigers all got richer, in each case their people stopped having as many kids, too. For evidence on more countries, read this piece in The Economist. 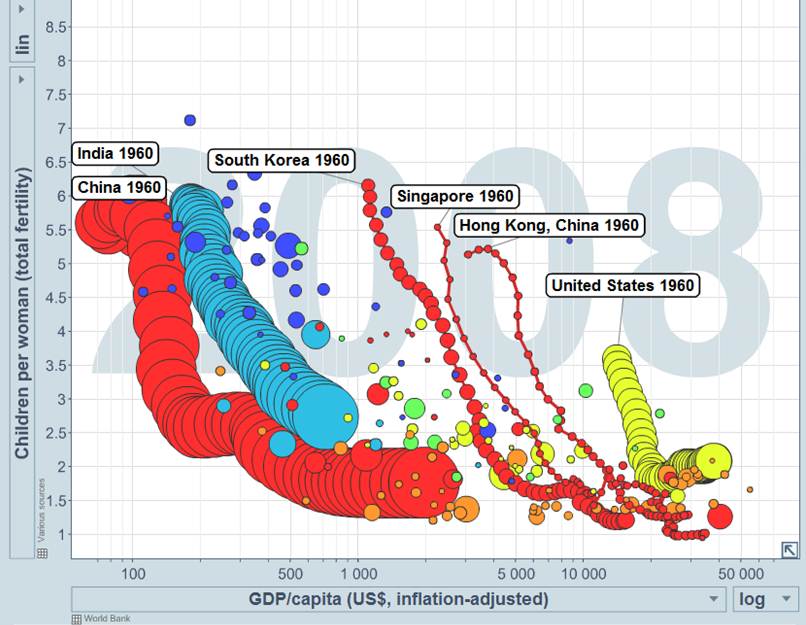 To see a much longer time series, turn to Larry Jones and Michele Tertilt and their paper “An Economic History of Fertility in the U.S.: 1826-1960” [ungated version], which shows that as the U.S. got richer over time, fertility fell.  [Legend for graph below: The blue line is “Children ever born”; orange is the “total fertility rate”; and the green line is just the orange line shifted back 27 years to make these different measures of fertility comparable.] 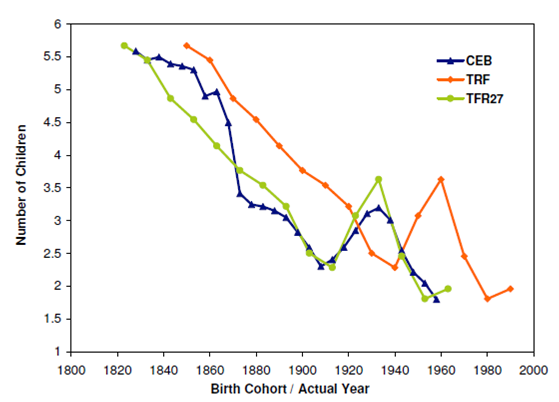 Given the time scale here, it’s not just that the invention of contraceptives changed everything— this is a long-run pattern, perhaps knocked around a bit by war.
Or we could look at the cross-section, comparing rich and poor Americans. The following plot also comes from Jones and Tertilt, who compare children ever born with the average income of the occupation of husbands. (They have to use this indirect measure because the census didn’t collect useful income data until relatively recently). Each downward-sloping line tells the same story for a different cohort: the rich have fewer kids than the poor. And the results show a staggering consistency—this pattern has been true for each cohort for over one-and-a-half centuries.  It’s as true for the pre-Pill cohorts as those with access to modern contraceptives. 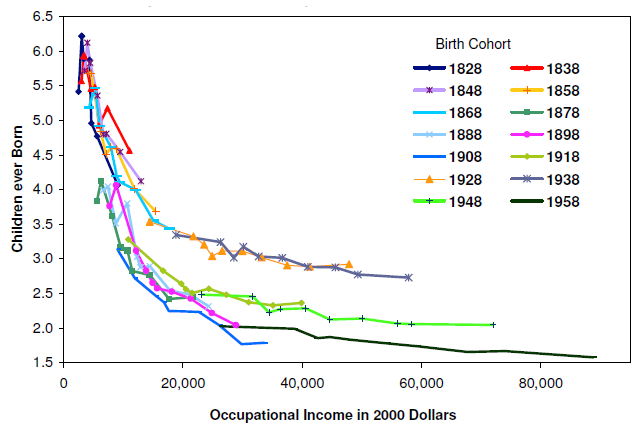 In a related paper, Alice Schoonbroodt and Michele Tertilt say that, “There is overwhelming empirical evidence that fertility is negatively related to income in most countries at most times.” They are right. Whether you cut the data across countries, through time, or across people at a point in time, the same fact arises: The richer you get, the fewer kids you have.
Yep, kids aren’t normal.