Why Do Airlines Always Lose Money? Hint: It's Not Due to Taxes or Fuel Costs 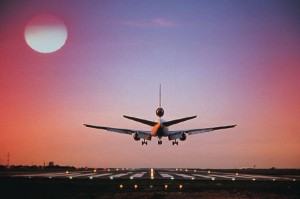 It’s been more than 30 years since the airline industry was deregulated in 1978. Since then it’s lost nearly $60 billion on U.S. operations, though most of the losses have come since 9/11. The airlines were already in trouble before the attacks happened. The plunge in demand and resulting liquidity crisis led to billions in government cash and loan guarantees– the first true bailout of the 21st century, and certainly a sign of things to come in the next decade.
In a paper published last month, (Abstract here; full version here) Berkeley economist and overall airline guru Severin Borenstein examines some of the most common explanations for the airline industry’s dismal performance, and why experts and deregulation advocates failed so badly to predict what would happen after deregulation 30 years ago. A few key stats:

The knee jerk explanation among many airline analysts has been to blame the industry’s poor performance on overly burdensome taxes and high fuel costs. But Borenstein argues they’ve had little to do with it:

Descriptive statistics suggest that high taxes have been at most a minor factor and fuel costs shocks played a role only in the last few years. Major drivers seem to be the severe demand downturn after 9/11 — demand remained much weaker in 2009 than it was in 2000 — and the large cost differential between legacy airlines and the low-cost carriers, which has persisted even as their price differentials have greatly declined.

Here’s his case against fuel costs as the main culprit:

Fuel costs increases have certainly been a significant component of losses in some years, most obviously in 2008. Over the deregulation era, however, oil costs were highest in the first 7 years and the most recent 5 years, over $40 per barrel in 2009 dollars, and much lower during the 19 intervening years. [F]rom 1986 to 2004 the average jet fuel price was below $1.40 per gallon — relatively stable and much lower than in the early period of deregulation. Yet, the industry still lost money in 13 of those 19 years and on net lost $31 billion in 2009 dollars.

While there have been several taxes added to the cost of flying (passenger facility charges in the early 1990s, the segment tax in 1997, and the September 11 security fee in early 2002), Borenstein argues that the problem seems not to be that taxes have risen, but that base fares have fallen and stayed so low. He attributes this to the rise of low-cost carriers (LCCs), and the inability of  the legacy players to adjust:

Adjusted for the average flight distance, legacy carrier costs have remained 30%-60% higher than the LCCs for nearly all of the deregulation era, averaging about 40% higher in the last decade.
While the cost differential between LCCs and non-LCCs has remained large, the average price differential has been shrinking. LCC fares have declined much less than those of legacy carriers in the 2000s, reflecting in part their lower burden of excess aircraft capacity. This is no doubt a large part of the reason that LCCs have suffered much milder losses in the 2000s.

Airline bottom lines improved in 2010 as the industry consolidated routes and took profits, but Borenstein sees no reason why the future will be any less dismal.

[T]here is little reason to think those disruptions will be less frequent in the future. Furthermore, after more than 30 years, it seems unlikely that airline losses are due entirely to a series of unfortunate exogenous events relative to what management and investors should have expected.
[T]he experience of the last decade suggests that until legacy carriers can either close the cost gap with LCCs or increase the price premium they maintain, they will likely have difficulty earning consistent profits through the typical cycles in the airline business environment.