Why Does the South Still Commemorate the Civil War, But Not the North? Bring Your Questions for Historian Peter Coclanis

This year marks the 150th anniversary of the start of the American Civil War. Celebrations, commemorations, remembrances of all kinds are planned over the next four years. Twenty-two states are getting in on the action. But the majority of events, and the people displaying the most zeal for the occasion, are in the South. 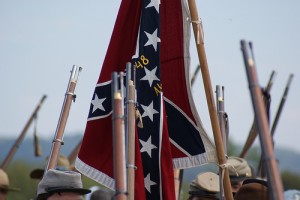 In December, a mostly white crowd turned out in their antebellum best for the Secession Ball in Charleston, S.C. In February, the Sons of Confederate Veterans descended on the state capitol in Montgomery, Ala., to cheer the reenactment of Jefferson Davis being sworn in as president of the Confederacy. My home state of Virginia, where a third of all Civil War battles were fought, is spending millions in hopes of cashing in on the four-year event. In the South, the Civil War is still big business, which got me thinking: why are the ones who lost the war trying the hardest to remember it? The Civil War devastated the South, and plunged much of the region into a century of poverty and economic stagnation, the effects of which are still apparent in many areas. The South’s relationship with the “Lost Cause” is obviously complicated, but where else in history do we see the losers commemorating a war while the winners, by comparison, largely ignore its anniversary?
For some insight, I turned to Peter Coclanis, a professor of economic and business history at the University of North Carolina whose research focuses on the American South in the eighteenth and nineteenth centuries. Coclanis offered some interesting thoughts on the economic legacy of the Civil War in the South, and why many southerners are still so keen to remember it. Below, I’ve paraphrased his remarks, which should give you more than enough fodder to ask him some good questions. He has agreed to field reader questions so please post them in the comments section and, as always, we’ll post his answers in short course. As we have, right here.

In 1860, the American South was one of the wealthiest areas in the world, an agrarian, capitalist economy that enjoyed a handful of comparative advantages: namely its ability to grow and get to market a small number of crops for which there was strong international demand: cotton, tobacco, and rice in particular. There was also the obvious labor advantage of slavery. But that advantage wasn’t so much economic as it was coercive. Getting people to work in extremely difficult conditions, i.e. cultivating sugar and rice out of the sweltering, bug-infested swamps of Georgia and Mississippi was slavery’s biggest advantage. Without the coercion of forced labor, it’s doubtful people would have ever tilled much of that land, certainly not in the numbers that actually did.
But as impressive as it was, the economic growth of the South lacked qualitative development. It wasn’t moving up the value-added chain. While innovation flourished in the industrial North, it wasn’t exactly stagnant in the South, but channeled into narrow agricultural lines. The voracious global demand for cotton and tobacco masked economic weaknesses that would have huge long-term consequences.
Those consequences are most apparent in the economic inversion that took place following the war. The parts of the South that were generally the richest in 1860 are today its poorest. These were the areas with the highest concentration of plantations: a swath of land stretching from coastal South Carolina down through Georgia, and west into Alabama, Mississippi, and Louisiana. Today, this region is home to some of the poorest counties in America, with high rates of unemployment, low-skilled labor, and other social ills like obesity and a lack of education. It’s this inversion that’s at the heart of why many southerners—particularly in these areas—remember the war so fondly, or at least the time that preceded it. Faced with their current circumstances, it’s easy to see why so many are so eager to celebrate a time when they were near the top of the world’s economic heap. In 1860, half of the South’s wealth was held in the form of slaves. By the end of the war, it was gone, legally defined into oblivion by emancipation.
What followed was roughly a century of economic stagnation. As late as 1930, per capita income in the South was roughly half the national average. World War II jump-started things, particularly along the Southern coast. Beginning in the postwar decades, much of the South pursued a development strategy to transition away from agriculture toward low-level manufacturing. This worked quite well for a generation or so, and drew millions of southern Americans out of poverty. By the early 1980s, the per-capita income of the South was about 90 percent of the national average. But that was the peak. Globalization, automation and other forces have undercut those gains, and the South has not converged at all upon national norms over the past 30 years.