Are the Benefits of Prescription Drugs Large Enough to Excuse Overdose Deaths? 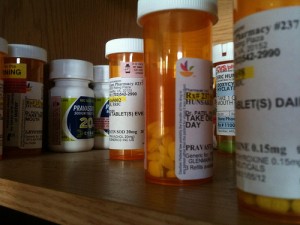 That is the question I found myself asking while looking at a new Centers for Disease Control report that analyzes drug-overdose deaths in Florida from 2003-2009. I am guessing the answer is a resounding yes, but it’s probably a question worth asking. During that period, the death rate for prescription drugs rose 84.2 percent, from 7.3 to 13.4 per 100,000 people. (Note that these numbers represent unintentional deaths, not suicides — although when you’re talking about death by drugs, the intention isn’t always clear.) Interestingly, the death rate from illicit drugs — primarily heroin and cocaine — has fallen 21.4 percent, to 3.4 per 100,000 people.

That makes the rate of death by prescription overdose nearly 4 times that of illicit drugs — and a lot more people use prescriptions than cocaine or heroin. Meanwhile, the overdose rate from alcohol has risen 81.4 percent over the same period, to 2.8 per 100,000. This is a complex issue of course but it is interesting to me that illicit drug-related deaths fell so much, as alcohol and prescription drug-related deaths both increased substantially.

An important stat from that death figure is how many of those deaths were from acetaminophen overdose. Many on Rx pain pills do not realize they are also getting a hefty dose of acetaminophen as well and often take stand alone acetaminophen (Tylenol) on top of it. I believe in Canada, they are allowed to market oxycodone without the acetaminophen half of it. How much difference that would make might be important to look into.

"the lowest death rate of the three categories belongs to the one illicit product."

What am I missing?

It seems the editorial portion of the article goes a long way in clearing this up.

Why are suicide deaths from prescription drugs a bad thing? They are a lot less messy and painless than a lot of other methods and help improve a person's agency over when they wish to no longer go on living. Don't forget the positive benefits to Social Security and end of life medical programs.

These aren't deaths from suicide.

To turn the issue around, are these suicides beneficial for society as a whole? Now I'm morally against abortion despite any economical benefit such as what is alleged in the last chapter of Freakanomics. However, I still wish to understand the costs of my moral stand.

On the subject of suicide, I lean more towards personal choice, and don't necessarily think a person killing themselves is doing wrong intrinsically (unless their pregnant). Regardless of my personal feeling on the matter, I'd like to know the economic implications of these suicides. Would these people have killed themselves otherwise? Would they become criminals or burdens to society like you allege unwanted children that could not be aborted do?

Its much higher than the non-suicide death rate from guns, anyway.

I think we're seeing some substitution in the market, as people move from "dangerous" (meaning possibly contaminated) street drugs to "safe" (meaning properly manufactured) prescription medications. This accounts for both the rising deaths in the one category and the falling deaths in the other.

Most people (wrongly) believe that prescription drugs are less likely to cause serious adverse effects than other substances. It's like someone taking herbal pills because they're "natural" and therefore "harmless". If the substance has enough power to help you, then it has enough power to hurt you. That's why they're prescription-only medications, rather than being sold next to the candy.

For the patient, there is the assumption that if the doctor has prescribed the medicine, then all is well. Of course, a doctor cannot take into account all the many variables that come into play for each person.

The freelance user, though, may take special precautions, proceeding under the assumption that they do NOT know it all, can make a mistake, can be forced to go to the ER and then face criminal charges, can actually die. So maybe they proceed more carefully?

The sharp rise in Oxycodone related deaths from 2003-2009 is no doubt related to the shockingly unethical marketing campaign of Purdue Pharma (owners of Oxycontin) during that same time period. Through a combination of pseudo-conferences for health care professionals and public advertising, Purdue successfully changed the prescription practices of doctors by misrepresenting the risk of addiction and abuse inherent with any opioid analgesic. The result was a flood of Oxycodone prescriptions, which led to Oxycontin becoming one of the most widely abused prescription drugs in the US (see Lil Wyte’s “Oxy Cotton” on YouTube for my very scientific grounding for this claim). This eventually became such a PR nightmare for the company that they’ve done away with Oxycontin – of course they’ve replaced it with another opioid that does essentially the same thing.

Here’s a great (and depressing) article that traces the marketing campaign and the “public health tragedy” that resulted:

Purdue ran into some legal troubles as well for all this:

If we can draw any correlation between the rise of Oxycodone related deaths and the flood of Oxycontin onto the market during this same period, it would seem big pharma is more of a public health problem than small-time heroin dealers. I wish the DEA would take these numbers seriously…maybe then they’d start locking up the big time crooks…and I’m not talking about heroin dealers. ;)

Wonder if this corresponds somehow to a happiness index of some sort. As people become less happy drug prescriptions go up and alcohol use goes up. And maybe, the illicit drug use has more of an inverse relationship.

Are the Benefits of Prescription Drugs Large Enough to Excuse Overdose Deaths?

Is this a serious question?

Somewhere along the line we need to ask what the death rate would be if people didn't take those prescription drugs.

The premise of the article is fallacious. It isolates deaths from overdose from the overall effect of drugs. For instance deaths from alcohol overdose are quoted as 2.8/100,000 (I have no means to dispute this, but it is relatively hard to overdose with a lethal dose of alcohol), However, the true number of deaths attributable to alcohol is vastly bigger - accidents, violence, cirrhosis and stroke to mention but a few. The same, I suspect, applies to street drugs.

Equally confused is the figure applied to the prescription drugs: Are these deaths caused purely by *exceeding the prescribed dose* of the drugs? In which case the deaths caused by inappropriate prescribing, allergic reaction, drug interaction etc. will be missed by the analysis.