The Mere Sight of an American Flag Can Shift Voters Republican 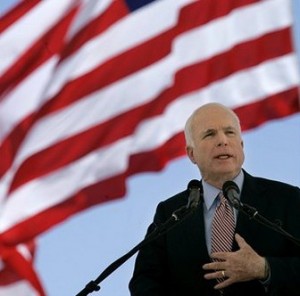 As if we needed more evidence that people often fail to practice rational, thoughtful analysis in making a decision: a new study by Travis Carter at the Center for Decision Research at the University of Chicago’s Booth School finds that people who are briefly exposed to the American flag shift toward Republican beliefs.

There is scant evidence that incidental cues in the environment significantly alter people’s political judgments and behavior in a durable way. We report that a brief exposure to the American flag led to a shift toward Republican beliefs, attitudes, and voting behavior among both Republican and Democratic participants, despite their overwhelming belief that exposure to the flag would not influence their behavior. In Experiment 1, which was conducted online during the 2008 U.S. presidential election, a single exposure to an American flag resulted in a significant increase in participants’ Republican voting intentions, voting behavior, political beliefs, and implicit and explicit attitudes, with some effects lasting 8 months after the exposure to the prime. In Experiment 2, we replicated the findings more than a year into the current Democratic presidential term. These results constitute the first evidence that nonconscious priming effects from exposure to a national flag can bias the citizenry toward one political party and can have considerable durability.

Social scientists have long speculated that national flags exert some unnoticed influence on political behavior, but empirical data has been hard to come by until 2007, when Israeli researchers found that subliminal exposure to a national flag leads voters to support politically moderate views. Carter argues (and seems to prove) that in countries dominated by a two-party system, the national flag instead moves people toward one end of the spectrum rather than to the middle.

Results of both experiments found that a single exposure to a small American flag during deliberation about voting intentions led to “significant and robust changes in participants’ voting intentions, voting behavior, and political attitudes, all in the politically conservative direction.”

Does this mean Obama should take off his flag lapel pin?

Sounds to me like the Democrats have an image problem.

So many easy cheap shots, I am not even gonna bother.

Why should he take off his flag lapel pin? He is clearly right of middle.

I'm a Republican, but it bothers me deeply that the Republican party has so co-opted patriotism and religion that "real" Christians are expected to be politically conservative, etc.

I may not agree with a lot of the Democrats, but most of us can agree that we ALL want what is best for America. The Republicans see that as boosting big business to create jobs; the Democrats see that has making sure that poor have adequate resources, and so on.

No party should be co-branded on the American Flag. It belongs to all of us. And certainly no party should be the "Party of God." That's utter blasphemy...except that millions of sincere believers believe pretty much that, their political views trumping their religious ones.

As a previous poster pointed out, the Democrats have an image problem. While the Republicans have wrapped themselves in the flag, too many Democrats have found that "distasteful." They do this for sincere reasons: They understand that America, for all that is good about it, also has some very dark things to account for. The Republicans can somehow rationalize such things away.

Now that this is know, you can be sure that voting precincts will have people waving the American flag just outside the doors, seeking to gain votes. How sad that we have allowed images that belong to ALL of us to become, by and large, the property of my party.

I sympathize with your view point but I think your estimation of each party's ideas may be naively benevolent.

The Democratic party are not benevolet welfare statists. It is fundamentally opposed to the individualism that is at the base of America's unique culture and politics. The Republican party is only partially sympathetic to it, torn between that and Christian fundamentalism. The Republicans are associated with patriotism because they are at least 50% sympathetic with Americanism.

I realized the other day that the polling place closest to me, serving ~5,000 residents, happens to have five US flags within direct line of sight. It's a cluster of government buildings, each owned by a different agency (post office, city building, etc). I wonder if that precinct skews slightly Republican. Since one of the flags was just added (new building), it might be possible to see whether the increased number of flags makes a difference.

Not `always.' sometimes `somewhat.' If I were a registered republican, I would vote for Obama. Now that is funny. Perhaps that is why they are so opposed to his' idea. sounds too much like them. In effect, a vote for Obama is a real vote Republican. Isn't this the real problem- the upcoming election. They have no one in mind. The trouble is, we need a real two party system (even if the differences are not so great). I mean not all of the democratic programs are in good working order. Take health care! I still do not know what has changed since Obama was elected. So far as I have been concerned- nothing has changed other than that my costs have gone up hugely and going to the doctor has become a meaningless event in which nothing gets done to figure out the cause of this or that. Two weeks since my daughter contracted a sore throad and she still does not know the cause of the problem. The doc sent her home with over the counter cough serrup and she still is sick. I say- that is not medecine, but poor judgment and reckless endangerment of a child's well being.

The Democratic party consistently fails at justifying its policies with reference to American principles, so, this is unsurprising.

The Republican party is split between two philosophies - the secular classical liberalism of the founders and of 20th century intellectuals like Ludwig Von Mises and Ayn Rand, and Christian Fundamentalism.

This may all well be true, but the only individual I've ever known to disrespect the stars and stripes is my neighbor two doors down.

He's been flying it upside down for some reason since January, 2009. I'm guessing, given the plethora of Sarah Palin/NRA stickers on his truck, that he is politically dissatisfied, rather than a stranded vessel at sea.

After talking with a few neighbors, left and right (literally and politically), about his display, I think all of us have disassociated the multi-generational republican effort to co-opt it, and are pretty hurt at this disrespectful teabeggar display.

Apparently people are offended by the sight of American flags and therefore seeing one causes them to vote for the party intent on destroying America.

Every time I see this type of phrase - "a single exposure to an American flag resulted in a significant increase in participants’ Republican voting intentions..." - it never provides the actual percentage. I'm not saying it's not true, however if a study comes out that significantly affects anything (positively, negatively, increase, or decrease), I along with most would normally like to have a quantifiable value in place of the word "significant".

Hmmmm...seems hard to believe. EVERY election has a plethora, a veritable sea of U.S. flags, almost anywhere you look as you approach Election Day. If this were really a significant effect, and it lasted for 8 months after a single priming, then why don't the Republicans win every election? Of the last four elections, the Democrats won two (2006 and 2008) and the Republicans had one big victory (2010) and one squeaker (2004). If you counted the number of flag-sightings which the average U.S. voter had in the 8 months running up to any of these elections, it must be at least into the hundreds, perhaps thousands. The evidence suggests that there's something wrong with the study design, or they're overstating their results.

"I’m a Republican, but it bothers me deeply that the Republican party has so co-opted patriotism and religion..."

Is that the problem -- or is that Democrats have so totally abandoned love of country and faith that Republicans become the default choice?

Between the time when they saw the flag and when they made a hard decision is where the battle is won.

I think this is less a PR problem and more of a psychological effect.

(This is going to be really hard to describe in a neutral fashion, but here goes :-) )

It is my observation that there are certain personality traits that compliment or correlate to the most politically left of center. Examples:

- Slight to moderate distrust of "patriotism" as something virtuous or important
- Low estimation of historical documents', quotes', and events' value in modern political discussions

This may seem harsh, but it's something I've encountered frequently. (margin of error, unlimited)

This manifests itself in comments such as "the Constitution is an antiquated, racist document". Or "America is no better than any other nation".

I won't belabor the point because I've possibly already taken it too far.

The point is, I think there is a connection between this type of outlook and a more liberal political position. So, it could be said that anything that might effectively stir up conscious or unconscious feelings of patriotism (something that one might rationally say is more valued quality in right of center circles) could exert a right leaning bias on exposed voters. (though I would guess this would be extremely slight)

Most people have experiences they associate with flags and other patriotic imagery. 9/11. First 4th of July parade. Operation Dessert Storm. Moments of national unity that are part of their makeup now, even if suppressed. Perhaps seeing a flag involuntarily taps into those experiences and temporarily effects a person's decision making?

All of this being said, there is probably a branding/PR aspect here too. :)

I think you're on to something. I typically vote Democrat in major elections, but I do agree that the past Democratic candidates have spent more time than Republicans complaining about problems with our country rather than acknowledging our successes. I think this was particularly true with Gore and Kerry, who came across as rather negative and dogmatic on America, instead of positive and inspirational. For example, Kerry referred referred to US military allies as the "coalition of the coerced and the bribed." Regardless of how one felt about the goals of the Iraq war (I did not agree with it), that is not a very patriotic or productive way to describe US allies.

Are the studies always carried out by students? What if two-party countries have schools that favor one party. For example, colleges in the U.S. usually have a liberal atmosphere. If the students are designing the experiments and interpreting the results, a move toward moderation may appear in their eyes as a shift toward the view they don't share.