The Costco Effect: Why Does the Wholesaler Cause Inflation? 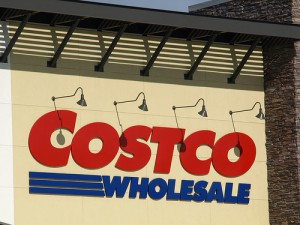 There’s a lot of data showing that Walmart causes prices to decline when it enters a local market (see here, here and here). Why then, according to a new study, does Costco have the opposite effect, and cause competitors to raise their prices? The answer boils down to the complex ways that stores choose to compete against each other, and shows that not all big box retailers are created equal. Here’s the abstract:

Prior research shows grocery stores reduce prices to compete with Walmart Supercenters. This study finds evidence that the competitive effects of two other big box retailers – Costco and Walmart-owned Sam’s Club – are quite different. Using city-level panel grocery price data matched with a unique data set on Walmart and warehouse club locations, we find that Costco entry is associated with higher grocery prices at incumbent retailers, and that the effect is strongest in cities with small populations and high grocery store densities. This is consistent with incumbents competing with Costco along non-price dimensions such as product quality or quality of the shopping experience. We find no evidence that Sam’s Club entry affects grocery stores’ prices, consistent with Sam’s Club’s focus on small businesses instead of consumers.

The study’s authors, Charles J. Courtemanche and Art Carden have looked at big-box retailers before. Their 2010 paper, “Supersizing Supercenters? The Impact of Wal-Mart Supercenters on Body Mass Index and Obesity,” showed that each additional Walmart Supercenter per 100,000 people increases the obesity rate by 2.3 percentage points. They concluded that the proliferation of Walmart Supercenters may explain 10.5% of the rise in the obesity rate since the 1980s. (On a side note, if you haven’t already, check out this flow map depicting the growth of Walmarts and Sam’s Clubs.)

Their new study shows that a Costco store increases competitors’ grocery prices by 1.4% in the short run and 2.7% in the long run; whereas previous research shows that a new Walmart generally reduces prices by 1%  to 1.7% in the short-term, and by about four times as much in the long run. This demonstrates just how nuanced the economics of strategic behavior really are. While incumbent grocers try to match Walmart on price, they figure it’s simply not worth it to go toe-to-toe with a warehouse club like Costco. While Walmart has made its stores more physically appealing over the years, Costco’s remain drab and utilitarian: pallets of bulk items sitting on concrete floors remains the dominant aesthetic. As a result, the only competitive advantage incumbent grocers see worth pursuing is on experience and convenience, choosing, as the authors point out, to cede “price-sensitive consumers who are willing to drive longer distances for a less pleasant shopping experience in order to obtain deep discounts.” By focusing on less-price sensitive customers, incumbents are able to sneak in some price hikes without affecting sales.

The Costco effect is strongest on fruits, vegetables, meats and drinks, with the biggest price increase on lettuce.

This is very interesting. I'd like to see a game theoretic analysis of what's happening.

On a minor note, Philips misuses of the word 'inflation'. Increases in grocery prices are not necesarily a rise in general prices. Grocery prices may go up as all other prices fall. The article should have been entitled something like "The Costco Effect: Why does the wholesaler cause regional grocery prices to rise?"

Seriously? As a former commercial landlord with grocery tenants, I can tell you the reason is not "product quality" but the difference between bulk and individual pricing. I haven't read the study but, my word, didn't they talk to people in the field? Costco charges more for more stuff; you buy a big bunch of bananas, a whole container of dates, a 2 pound minimum package of little cucumbers or 3 seedless at a time, an entire tray of tomatoes. This means a grocer can sell cucumbers for some pennies more because many customers want 1 cucumber, 4 tomatoes instead of 12, 3 bananas instead of 4 pounds. I thought that was obvious. It's not exactly a secret in retailing. Costco charges you $4 for twice more of something than you need so the local grocer can charge you a little over $2 for half as much because you've just saved nearly $2. Sure, the per unit price is higher but you waste less.

The difference with Walmart is they kill you - and we had Walmart as a tenant too - on price for individual items. That forces the grocer to worry about Walmart's weekly sale prices and discount more to keep traffic up. Remember, if you get traffic, you will get a mix of sale and non-sale purchases. Walmart builds an expectation that you can walk in and find some good grocery items, from produce on over, at really low prices. (Peanut butter and canned tuna are big examples.) So people come both because they want specific specials and the surprise specials they pull out. A grocer relies more on traditional weekly sales flyers. You may see "manager's specials" in more grocers now. That's an attempt to build the sense of surprise that Walmart has really mastered.

As for service and ambience, that's mostly for pushing prepared foods. Costco drives a lot of that too; they have bigger packages of the processed crap Americans devour so you have more grocers offering much more higher margin prepared foods - which are usually highly processed. You see this in a range from grab n go stations to Whole Foods that have nearly entire restaurants of steam tables and the like set up - selling the imagery of high quality food without the actual quality.

Jonathan, you missed the point. We all know that individual items will sell for more than a bulk package(this is usually the case anyways). This article isn't saying that grocery stores charge 1-1.7% more than costco. It's saying they charge 1-1.7% more than they charged themselves before costco came in! I.E. if a single banana is $1 at the grocery store, but costsco has 5 for $4, the grocer will instead raise their price to $1.01 or $1.02 in the short term, and eventually as high as $1.06 or so in the long term. This article has nothing to do with grocery store prices as compared to costco prices. It's grocery store prices compared to what they were before costco came in.

Sorry, William, but that was my point: the mechanism by which Costco causes price increases is well known in the commercial real estate industry. I didn't miss the point. I was explaining why this happens. Your examples simply repeat what I said. I have no idea how you thought I was comparing Costco prices to grocery prices.

This is not inflation. It's a price increase. Inflation is a monetary phenomenon

Thank you! it annoys me whenever "economists" use the term to mean something else completely different!

"This is consistent with incumbents competing with Costco along non-price dimensions as product quality or quality of the shopping experience." Costco product quality exceeds any big box store and that of most smaller competitors.

If that statement was true, then the pricing effect of Walmart would be the opposite, since the quality and enjoyment of shopping in a Walmart is well below its competitors.

I believe a true study would show that prices go up because Costco forces its competitors to improve their offerings and provide higher quality--and more expensive products.

Your last comment, about Costco pushing prices up because it forces competitors to provide higher quality and thus more expensive items, is consistent with what one comment above says about Costco offering more prepared foods and thus forcing other grocery stores to do likewise. Also, it's consistent with the author's belief that perhaps other grocery stores focus more on convenience, quality, or selection since they can't compete solely on price with the bulk pricing of Costco.

Is there a way to correlate flow maps? I would like to see which infectious disease Wal*Mart best matches up to.

I am legitimately confused; why is Wal-Mart (WMT) evil? I stress legitimately because I understand that many people HATE Wal-Mart and I honestly, sincerely, do not know why.

I like WMT because:
1) prices are low
2) I can buy a belt, lunch, get a key made, and pick up a prescription at the same location
3) there is always one close

I understand that they pay low wages, but the employees that I have seen look like they don’t deserve minimum wage. They’re usually stupid and apathetic, not all, but a large portion (again, that I see). Of course, WMT is getting what they pay for, but isn’t that their right? It’s not like these employees would be building rockets or curing cancer if WMT wasn’t around to keep them employed. Don’t we need someone to employ the low-skilled?

I’ve heard that they put local “mom-and-pop” (M&P) stores out of business, but so what? Is it bad to have fewer M&P stores? If WMT can deliver the same TV cheaper, wouldn’t society benefit from this competitive advantage?

If there is a legitimate, researched stance that WMT is a negative to society, I’d be open to listen.

Not to mention the fact that centralized goods distribution is more efficient and a better use of resources. That is why I love places like IKEA and the like. Better to have one super efficient location then 20 inefficient tiny ones keeping the costs really high. The main people Walmart hurt were small business owners and that is one of the reasons the opposition to it gets national play.

People dislocated by new economic efficiencies always complain vociferously about the things dislocated them, and if the people being dislocated have money those complaints can get some traction.

I also believe it has more to do with the size of the package. Local grocers know that some of us don't want to buy a 5 lb package of whatever, so we won't mind paying more per oz to buy a smaller package. Our reasons are we either don't want to store that huge amount or don't want to get tired of eating the same thing for months.

Costco only carries one huge size of something. Walmart usually carries several sizes and the largest isn't always cheapest per oz. So local grocers are more inclined to compete with Walmart.

I'm betting cash-flow has a lot to do with this. The incumbent grocers know that many shoppers are not going to be able to put down $20 for a 20 boxes of cereal at Costco...when they can shop at the incumbent grocer and buy a single box of cereal for $1.25.

People need the extra money they would spend buy in bulk...to buy the rest of the groceries they need.

Of course, if a group of neighbors got together, splitting up the bulk purchases, they could save a lot of money, no doubt.

The grocery stores, seeing an opportunity caused by Costco's bulk offerings, can now RAISE their own prices, so long as buying from them is still an advantage over buying from Costco.