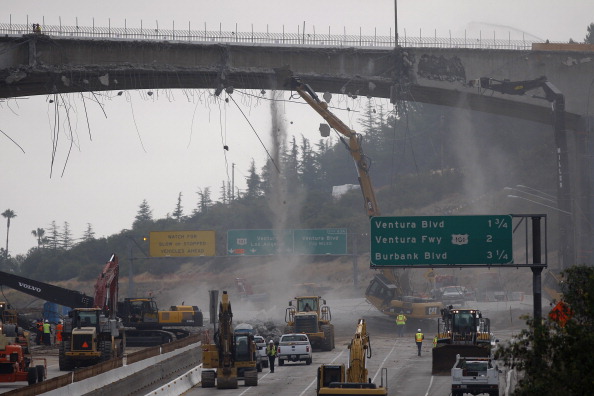 Workers demolish the south side of Mulholland overpass on the 405 freeway during the 53-hour total freeway closure resulting in massive traffic disruptions expected throughout the region on July 16, 2011 in Los Angeles, California. The bridge is being demolished as part of a $1 billion project to add carpool lanes and make other improvements along the 405 freeway from Orange County to the city of San Fernando. (Photo by David McNew/Getty Images)

L.A.’s “Carmageddon” is over. For those in the rest of the country, or Angelenos who spent the last two months trekking in Bhutan or in monastic seclusion, Carmageddon was the result of the complete closure of a major Los Angeles freeway over the weekend. The results?
Carmageddon was predicted by almost all journalists and government officials to be a brewing traffic nightmare of unprecedented dimensions. Only a day before the event I was reading predictions by our transportation authorities stating that traffic as much as 50 miles away would reach nightmare-like proportions. Only a very few, including myself, predicted we would see a situation of unusually light traffic reminiscent of the last time a similar situation happened: the 1984 Los Angeles Olympics.
In fact, Carmageddon saw stunningly low traffic levels, with many who did venture out reporting they had never driven at such speeds in LA in their lifetimes. Moreover, fears that the project (which involved demolishing half of a bridge over the highway) would drag on into Monday’s rush hour proved totally unfounded, as the work was completed and the freeway reopened on Sunday afternoon, many hours ahead of schedule.
Had people attempted to drive as normal there undoubtedly would have been a traffic fiasco, but continual and shrill media warnings worked better than most dreamed, and the city stayed home for the weekend.
If they are to be taken at their word, the pundits have been proven to be extremely poor judges of human nature. One would think that at the very least the politicians, who create campaign ads, would be familiar with the fact that if you repeat something often enough in the media, you can get many people to believe it, no matter how outlandish it is.
But there’s another possibility. I wonder if many of the pundits were more astute than they let on and didn’t actually believe their own hype. Belief that heavy traffic would fail to materialize would raise an interesting moral dilemma. Suppose you believe, as I did, that Carmageddon would be a wet firecracker. Do you dare take to the airwaves, newspaper pages and blogs with that opinion? If not, you join the herd by propagating dire horror stories, you are a bit of a fibber, and, if you work for government, probably a soon-to-be-unemployed fibber.
On the other hand, if you tell the truth as you see it, and predict traffic will be negligible, you are contributing to a sense of complacency on the part of the public that might actually lead to the traffic nightmare you are prognosticating will not happen. If this is the case, by telling the truth you might be helping to make yourself a fibber. Either way, it seems like bad karma has to result from this.
It will be interesting to see what happens a year from now, when we have to go through this entire exercise again as the other half of the bridge comes down. Undoubtedly the Cassandras will prophecy doom and gloom again, but this time they will be on even shakier ground since observed reality from the first experience runs totally counter to the doomsday scenario.
But regardless of what they think to be true, and their personal standards of honesty, jawbone the prognosticators must, and with renewed fervor, because based on the results of Carmageddon:

In any event, truly talented spin will be required to repeat the triumph of last weekend. Will the public be spun? Many times when it comes to transportation policy I wish the electorate was better informed and wiser, but in this case we need to hope that the people of LA are extremely easily swayed by Jedi mind tricks.
Hence, if you live in L.A., please close your browser. I’ll wait. OK, now that they’re gone, for the rest of you I predict our propaganda will work and predictions of Carmageddon 2 will be as inaccurate as Carmageddon 1 and the other end-of-the-world scenarios that get pedaled from time to time. But if anybody from LA asks, tell them I predicted the mother of all traffic jams. By the time Carmageddon 2 fails to happen and they come looking for me demanding satisfaction, I’ll be off enjoying the beach in rare and spectacular seclusion.