In New York City, It Still Pays to Hop the Subway Turnstile 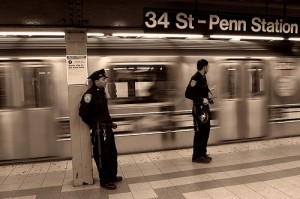 A report by New York City’s Metropolitan Transportation Authority seems to prove that hopping a subway turnstile is worth the risk of getting caught and fined. The MTA estimates that riders entered the subway without paying 18.5 million times in 2009 (an average of 50,684 a day) while the police issued just 120,000 summonses, or 1 for every 154 jumps.
The report figures that a regular turnstile jumper has a chance of getting caught only once every 6 to 13 weeks. At $100 per fine, this works out to be cheaper than a $27 weekly unlimited Metrocard that would cost $162 over six weeks. So the fare-skipper who gets nabbed only once in that period still comes out ahead by $62. And that was in 2009. While the price for a weekly pass has since increased to $29, the cost of the fine has not, so in 2011 it pays even more to hop the turnstile.
From the Daily News:

“This basic street economics might explain observed evasion behaviors,” the authors of the report wrote, arguing stiffer penalties might cut down on scofflaws. “Higher fines or arrests may have better deterrent effects.”

Now that the MTA knows the frequency of fare jumpers, and how often they get caught, a minimum price of $174 per fine seems to make sense. Of course, there are other costs to consider: the social stigma of not only being seen jumping the turnstile, but also of getting caught and written up by the cops. Not something you want to have happen in front of your boss. Though those costs certainly have different weights for different people.
And let’s not forget the lost revenue for the city: the MTA estimates it lost $31 million due to fare evasion last year.
Arrests are up this year by about 5% from the same time last year. But besides employing more transit cops to keep a watchful eye on the turnstiles, and raising the price of the fine, what other creative ways might the MTA crack down on this?