The Physics of Putting

I always love it when I’ve been doing something one way my whole life, and then someone explains to me there is a better way to do that same thing, and the new way is so simple I can immediately switch and see benefits.
Usually it is a new technology that unlocks the magic. For instance, XM Radio, iTunes and Pandora all fundamentally changed the way I listen to music. My Sonicare toothbrush is a hundred times better than a regular toothbrush. After the creation of seedless watermelons, I would never again intentionally buy one that had seeds. Microwave popcorn is another example.
What is even neater, I think, than a new technology changing things, is when someone just comes up with a better way of thinking about a problem. I’ve done a little bit of reading on the origins of randomized experimentation, and it is fascinating to see how that new and powerful idea emerged. 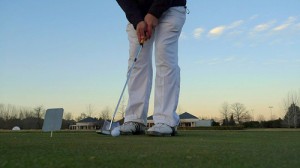 On a much smaller scale, I’ve recently had that sort of change in my thinking about another issue: how to read putts on the green when playing golf.
I’ve always had bad eyesight and poor spatial abilities. Forget judging how much a putt will break, I have a hard time even saying whether it will curve to the left or the right.
That was until I met Mark Sweeney, the founder of Aimpoint Technologies, who just may be at the forefront of a revolution in golf. Essentially, Sweeney applies the principles of physics to reading putts. If you watch golf on television, you will know Sweeney indirectly; he is responsible for the graphics that get superimposed on the green showing in advance how a golfer’s putt will break.
How much a given putt will break depends mostly on four factors: the speed of the green, the slope of the terrain, the length of the putt, and the angle between the ball, the hole, and the fall line of the green. It’s all pretty straightforward when Sweeney (or one of his trained instructors) explains it, but it is totally different from any advice I’ve ever heard before on reading greens. One of the keys to the method – and this is something I never would have guessed – is that our feet are better than our eyes at sensing slopes. Once one knows the method, reading a putt becomes formulaic. Not that I always read the putts correctly (although in the time I was with Mark Sweeney, he did read every putt correctly), but at least now I have a fighting chance.
For reasons that are hard to fathom, I’ve invested 5,000 hours in golf over my life. Those two hours with Mark Sweeney may be the most valuable two hours I’ve ever had.
Sweeney’s approach did create a different problem, however.  Before, I never knew where I should putt the ball, so it didn’t matter very much whether I could hit it on line. Now, I need to learn how to putt the ball where I want it to go.  And that, unfortunately, will probably cost me about 500 hours.