Why You're More Likely to Die After Getting Paid 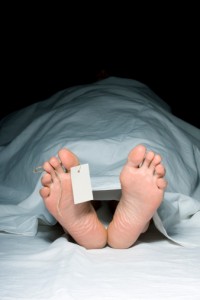 Last year, Notre Dame economist William Evans, along with Timothy Moore from the University of Maryland, documented that mortality rates spike by almost one percent on the first day of every month, remain high for the next few days, and then steadily decline over the course of the month. Now they think they’ve figured out one reason why: our paychecks are killing us.
In a study to be published in an upcoming issue of the Journal of Public Economics, Evans and Moore examined the death records of four demographic groups in the U.S.: seniors on Social Security; military personnel; families receiving tax rebate checks in 2001; and recipients of Alaska’s Permanent Fund dividends. Their results show that mortality increased the week after checks arrived for each of these groups.
Though the effects are strikingly consistent across populations, there are some interesting variations:

Evans was good enough to answer some questions about his research:
Q: How did you build your database?
A: We looked at all the death records from 1973 to 2006, some 75 million deaths in the U.S. The hardest part was finding data on when people get paid, and the real genesis of the test was our focus on military pay. We looked at 23 counties with large military bases, and examined from 1973 to 1988, before the large round of base closings began in the early 1990s. The effects among military personnel were striking.
Q: Was there a stronger correlation between getting paid and dying among military personnel?
A: There was, significantly so. We find much larger responses within younger people, people with low education, and people with liquidity issues. And the military hits on all three of those factors; plus you have some partying issues there. In counties with a large military presence, daily mortality among 17-to-29-year-olds increases by around 10 percent the week after mid-month paychecks arrive, whereas over the same period there is little change in areas with a small military presence.
Q: So there was a bigger effect after the second paycheck than after the first?
A: Right, it’s that second paycheck that’s the real killer, demonstrably more deadly than the first. We figure that when the first check comes, you have all your bills to pay, so that check is earmarked for those activities. You have a much freer disposal of the income from your second check.
Q: What other granular data stuck out to you?
A: The differences in time-frame were interesting. For most of the population, the effect of the paycheck on increased mortality was about a week. But for the military personnel it was much shorter, only 3 or 4 days.
Q: What about cause of death?
A: For the 17 to 29 population, you see lots of substance abuse and blunt force trauma from auto accidents.
Q: So is it fair to say that when people get paid, they go out and engage in risky behavior? They go party and buy drugs and drive drunk? Is that what’s happening here?
A: There is some of that, but it’s not that extreme for the most part. For a lot of people, you’re just going to the mall to buy something, which increases the risk of all kinds of things: car accidents, heart attacks. It’s not that you’re doing crazy, irresponsible things. It’s not the receipt of income that’s necessarily driving this, it’s the activity generated by the receipt, that’s the killer activity. And that cuts across the entire population.
Q: Did that surprise you, that it was consistent across different types of people?
A: Very much, I think that’s the most important phenomenon with this study, just how broad-based the effect is. The within-month mortality cycle holds for everyone, young and old, rich and poor. It is enhanced for certain demographics. But it’s also very persistent across populations. So, it’s not just poor people or young people, it’s everyone.
Q: What about issues with anxiety that getting paid can cause? Was it merely the physical activity associated with increased consumption that caused deaths, or is there also a psychological element here where people get more stressed and feel more anxious around the time they get paid?
A: That’s something we’re going to look into next. There are these high-frequency surveys that ask how happy people are. We’re interested in whether people are happier on the first of the month, and whether that matches our data on paychecks. Understanding the self-reported health status of people should help get at what some perceive to be these psychological or mental risks associated with getting paid.
Q: You looked at data going back more than 30 years. What changes did you notice?
A: I think we were struck with how consistent it was. We really thought this cycle would have gone down over time, since people have so much more access to consumer credit now than they did 30 years ago. We thought credit cards would’ve had a dampening effect. But we found no difference over time within this. The peak to trough is just as big in the mid to late 2000s as it was in the mid-70s.
Q: So What’s the lesson here? That we need to smooth consumption even more?
A: Well right, but how do you do that? Do you pay people more frequently? Remember, in the military, it’s that second paycheck that’s the real killer, so it’s not as simple as splitting one payment into two. There are a handful of states that have moved to a twice monthly system of welfare payments. We’re interested to see whether the distribution of deaths have changed with that. And of course, the other thing to look at is whether mortality response is correlated with how big the paycheck is.