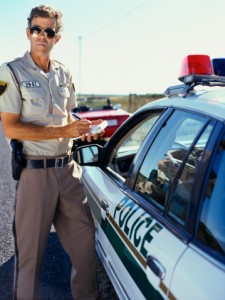 Last week was the sixth annual Operation Rolling Thunder police crack-down in Spartanburg, SC. Each year, law enforcement from North and South Carolina converge on the Spartanburg interstate highways for a five-day dragnet aimed at drug trafficking. This year officers made 18 felony arrests, netting $215,000 of seized cash, 11 pounds of cocaine, and eight pounds of marijuana.

“The numbers are a bit lower than in the past, I’m proud of that, meaning they are staying out of Spartanburg County, which that is our desire,” said Sheriff [Chuck]Wright. “I try to tell everybody that every piece of drug paraphernalia or drug you can find and get off the street, that’s one more somebody’s son or daughter that’s not having to deal with that.

Here are last year’s totals, according to the AP:

Last year, the operation ended with 73 arrests. Officers also seized $86,000 in cash, 13 pounds of cocaine, 7 pounds of marijuana and thousands of pills as well as other illegal items like guns counterfeit checks and fake designer purses.

Spartanburg is in western South Carolina, near the intersection of I-85 and I-26. The operation is advertised locally, and many of the arrests are of out of state drivers. Still, you wonder if they’d be better off not advertising, or switching up the timing. As Sheriff White says, drug runners are staying out of Spartanburg (likely because they’ve heard about the operation), which may be good for Spartanburg. But it just means they’re taking a different route.

What a complete and utter waste of time and money.

Maybe the police and lawmakers should take a course in economics. It might be better to cut off the demand rather than the supply.

If they didn't advertise it, they'd lose the main benefit: showing action to the voting public!

And how much tax money is wasted on this foolishness?

"Sheriff Wright tells 7 On Your Side that all agencies donated their time for the campaign, so it didn’t cost taxpayers extra money."

So how much money was spent on follow-up prosecutions, imprisonments, and so on? Humm... A little searching gives a few numbers - I don't guarantee their accuracy, but they're a starting point.

Average cost of a criminal trial: $5K/day. So assume 50 prosecutions (one per vehicle), and there goes $250K of public money, so that reduces profit to $215K.

Average sentence for a drug offense is about 6 years. Assume 50% conviction rate, that's 250 person-years of prison time. Cost of prison runs about $35K/year per prisoner, that's going to cost $9,350K. So it seems that this operation is likely to put the state over $9 million in the hole.

Then there's secondary lost revenue. Prisoners aren't making money, and so aren't paying taxes. Even after they get out, their lifetime earning potential will be much lower. They will no longer be in a position to support families, so they will probably be collecting some form of public assistance...

But don't forget that they'll be working in prison producing goods for next to nothing. It's the south. (And I used to work in Spartanburg, but wouldn't live there. I chose instead to live in Greenville, the only slightly more enlightened city 25 miles away. )

Still, I doubt that prison-produced goods have a very high market value.

Likewise with the rest. I'm just picking rough figures from a couple minutes of web searching. It'd be interesting to see actual numbers, if any of you economics types wanted to do a case study. Follow each case: take the cost of time spent in trial (or plea bargaining), cost of imprisonment or supervised probation, lost taxes from lost income, and everything else. Figure out the real net cost.

I guess that it depends on the desired outcome. If the outcome is to keep illegal drugs out of the county, then advertising that there will be a crackdown will likely keep runners from using a route through the county. This probably produces no noticeable change in surrounding areas. However, the goal isn't to change the area, it is to change to county.

Not to mention the fact t that one these criminals do get out of prison they're likely to stay on the area which means on 6-10 years we will have many more hardened criminals with high level connections on the area instead of letting them pass through to New York or wherever. If they really wanted to help the community they would seize the money and drugs then just let them go. I'm pretty sure the people they were delivering them to will take care of them themselves.

>>The operation is advertised locally

Seriously? Sounds like the goal is more to make drug trafficking "Somebody Else's Problem" more than it is to actually stop drug traffickers.

You advertise it locally so that you don't have to arrest any locals - the locals are all for tough law enforcement except when their friends and relatives get pinched.

“I try to tell everybody that every piece of drug paraphernalia or drug you can find and get off the street, that’s one more somebody’s son or daughter that’s not having to deal with that.''

It's more like for every bust the price of the drugs they are going to buy no matter what will just go up. So someones daughter will have to preform one more sex act to get her fix. Someones son will have to rob one more person to get his. On the bright side since you guys are all on the road the city should have less cops around making it less likely they will get caught and end up in jail.

It is actually advertised because the Supreme Court has ruled that without advertising the dragnets, the suspicionless stopping of drivers would violate the 4th amendment. That is also why drunk driving checkpoints are advertised, even if only effectively enough to satisfy the requirement.

i wish the drug market would not be my neighbor.

the violence that the demand from drugs in the US is causing here is terrible.....

sooner or later will be on your side too...

Personally, and selfishly, I am glad that they publish when Rolling Thunder is. I work in Spartanburg (typing this post from the Dirty South right now)! I can modify my driving habits for a week, and then get back to my normal, reckless driving. Or, is it wreckfull driving? We'll see this week.