This Week in Corn Predictions: The USDA Got it Right (Almost) 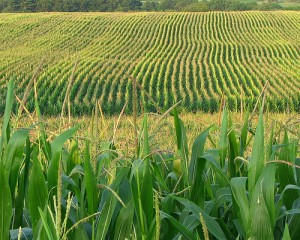 We’ve been having some fun recently at the expense of people who like to predict things. In our hour-long Freakonomics Radio episode “The Folly of Prediction” — which will be available as a podcast in the fall — we showed that humans are lousy at predicting just about anything: the weather, the stock market, elections. In fact, even most experts are only nominally better than a coin flip at determining a future outcome. And yet there remains a huge demand for professional predictors and forecasters.

Earlier this week, Stephen Dubner and Kai Ryssdal chatted about this on the Freakonomics Radio segment on Marketplace. The question remains: “should bad predictions be punished?”

However, the Wall Street Journal quoted an analyst who seemed to be hinting that the USDA was sandbagging after last year’s  whiff:

The department was criticized heavily last year for overestimating the corn crop in August and then slashing its outlook repeatedly in the fall. The cuts made in Thursday’s forecast look “proactive” in adjusting its expectations for the crop, said Bill Gentry, analyst for Risk Management Commodities, a brokerage in Indiana.

The man behind the prediction is Joe Prusacki, the head of USDA’s Statistics Division. Prusaki got loads of angry emails after last year’s missed forecast, which was hurt by dry weather for much of last summer. The weather has been equally bad this year. So us humans are still not great at predictions; and while 4.42% may seem like a trivial number, this causes huge ripple effects in the commodities markets.

CORRECTION: An earlier version of this post incorrectly stated that the corn yield forecast was revised downward by just 1.3%. The Wall Street Journal has issued a correction. This month‘s estimate is 12.9 billion bushels down from an estimate of 13.47 billion bushels last month. The bushel per acre yield has been revised from 158.7 to 153.0.

Just because this month's estimate is closer in percentage to the move a year ago doesn't mean it is any more accurate. Certainly the USDA could be dead on here but this particular percentage revision says nothing about how bad or good this estimate is. Last year was a VERY unusual year yield wise and as you note this one is as well. Both cuts are large for the USDA historically. This one happens to line up more with popular sentiment . Bowing to the masses makes them no more correct.

additionally, your numbers are wrong. Yield was revised down 3.6% 158.7 to 153. It was about 1.3% lower than analysts estimates of the USDA estimate. Editing required here boys.

So why exactly is a prediction of something that is subject to many fluctuating variables bad if it's off by a mere 7%?

I'm a retired editor and newspaper reporter. Years ago I wrote a lot of political columns when I wasn't absorbing the police blotter. In my guise as a seasoned prognosticator, a longtime officeholder asked me about to predict his chances for re-election: "George," I said, "I think you'll get re-elected, but the margin will be small." In that year of the Nixon landslide, he and most other Democrats lost the election. I sold my crystal ball for a loss, and I never predicted anything again. The upshot of my decision? I've never been wrong since that day.

You have two different reports when you compared crop production figures from the USDA. The number published prior to August is not one created by crop sampling or survey of producer's fields, its merely a rough guess using weather factors during planting. It is published in the WASDE by the WAOB. In the August Production report, which is published by NASS, the crops have started to be sampled by the USDA and a more proper estimate is made. The number from NASS then replaces the WASDE-WAOB guess in August. Of course weather is a large factor on whether the crop goes up or down from August as the grain is still being made by the plant. The August report is just a transition from a SWAG to a more educated guess. The September/October reports actually have more validity to knowledge of what the final crop will be as the grains are mature enough that a significant section of the grain crop is locked in. Though the USDA did missed the crop significantly last year, it did it for some of the right reasons. It stuck to the same methodology which did not factor in an excessive amount of rain and heat never seen before by a US crop. Hopefully they learned their lesson this year.

Many years ago, I demonstrated (with a 15-year database) that an electric utility's predictions of the next year's peak demands would have been more accurate had the utility predicted that they would be "about the same" as the previous year, instead of trying to extrapolate from market data, home building statistics, etc. The five-year predictions were better but the ten and fifteen year predictions proved to be not so hot because changing economic conditions and customer trends toward conservation always played havoc with the trend lines. Because an electric utility builds for fifteen and twenty years ahead, this made their construction planning a nightmare.

When you deal with intense capitalization activity, it's a tough world for predicting.

When Your Safety Becomes My Danger (Ep. 432)

The families of U.S. troops killed and wounded in Afghanistan are suing several companies that did reconstruction there. Why? These companies, they say,...