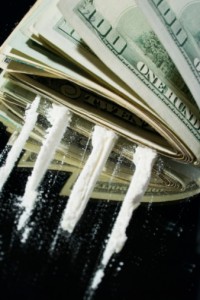 A new study by addiction and neuroscience researchers sheds new light on understanding how cocaine addicts make decisions, and how they value the drug against the immediate and delayed reward of other items, such as cash. The upshot is that addicts discount cocaine at a steeper rate than they do money, consistently choosing to have money now, rather than twice the value of cocaine later.  Here’s how the experiment worked:

Forty-seven cocaine addicts (who were all seeking treatment) were asked to guess the number of grams of cocaine worth $1,000. They were each then given a series of choices: cocaine now versus more cocaine later; money now versus more money later; cocaine now versus money later; or money now versus cocaine later. The initial amount offered for the immediate choice has half of the full value, and the delayed amount was always the full value. Preference was almost exclusively given to the money now option, according to the study’s lead researcher, Warren K. Bickel, a psychology professor at Virginia Tech, and director of the Advanced Recovery Research Center there.

Until now, researchers believed that cocaine addicts valued the drug above any other commodity, no matter what the situation. Bickel’s findings however show that cocaine addicts place extra value on the drug only when it is immediately available, and future values of cocaine are heavily discounted. Bickel found this to have positive implications for developing drug treatment programs based on incentives. In his study, he writes:

We showed that a delayed drug is discounted more than when the drug is immediately available, no matter what the other option is. In other words, drug users are less likely to use drugs when the choice to use is presented only as a future outcome rather than an immediately available one. For treatment programs for which abstinence is reinforced immediately and drug consumption is available only after a delay, the incentive to abstain may outweigh future drug consumption.

Might the responses be different if the addicts were currently under the influence of the drug and no recovering?

They might be different for "active" addicts but it looks like the study was framed around developing treatments. Presumably anyone seeking treatment is in the "recovering" category.

It would be interesting to get data on "active" addicts as a change in the results might indicate strategies for deterrence programs.

I must be missing something obvious, because I don't understand how a drug study can legally pass out cocaine to people.

I'm not sure about whether some drug studies can do those things or not, but what you're missing here is the participants did not actually get the cocaine or money, they simply answered about their preferences.

This confirms a lot of my suspicions regarding the financial services industry, its performance, and its extracurriculars.

Well they want the fix now, not in 30 days. So no matter the discount fare, it is infinitely more desirable (inelastic btw) to have the cash, go uptown and snort.

A better way this could have been conducted is to have the research/experiments done with test subject actually in withdrawal. Then I suspect the results would be very different.

I bet they'd take $500 worth of coke now over $1,000 in cash later. Immediate gratification, impulse control.

This makes sense. In 'Gang Leader for a Day' Dr. Venkatesh notes that gangs don't accept discounts for later on because of the uncertainty whether the other party will still even be around in the future. I would imagine its the same with drug dealing too, another illegal activity with potential for violence, arrest, or something along those lines

I don't think this study's results have anything to do with dependancy. A study done with money now versus more money later always results in the money now option because of the immediacy of now and the uncertainty of future. It's how we're programmed, to survive the here and now.
Whatever commodity you use the now option will always be chosen ahead of the future option.
A flawed study in my opinion, but what do I know.

For addicts, it is ALL ABOUT the next fix. They love their families just like you and I. They want to be decent people (and I would imagine that most are). But unless they have a stash somewhere, they are focused on getting the money, getting the drugs, not getting caught, etc.

If they KNEW that they could go to the local pharmacy and get their drug of choice for a reasonable price, instead of dealing with seedy people and paying the street premium for the drug, they likely wouldn't think anymore of their addiction than you and I think of our addiction to Coca-Cola, coffee, cigarettes, or alcohol. We don't have to worry about the next hit--it's right there waiting for us at home or the store--and we don't have to worry about getting arrested.

I now proceed under the general impression that we are ALL addicts. We just don't realize it because our drug of choice is legal, easily attainable, and available to us pretty much any time we want it. The unfortunate who is addicted to pain killer and the such, has to think around all of these things.

When we finally legalize drugs, I think we'll find that it does not turn out nearly so bad as we thought. And maybe better than we ever imagined.

Except...Have you ever heard the maxim, "One beer is too many and one thousand is never enough?" Addicts will still engage in toxic/addictive behavior when they have that nice supply. They'll still overdo it, be disconnected from loved ones, stuff their feelings and be disconnected from their consciences.

I would say that we are all habitual-- but not necessarily all addicts. There is a big difference between somebody addicted to hard drugs and somebody who needs their coffee. Drugs that highly mute feelings or distort reality in any significant way cause more problems than you may think.

I hear you, bro. But I am not convinced that a person who KNOWS that they will have an unlimited access to, say, pain killers is going to act anywhere near the same as the person who doesn't know where the next hit is coming from.

A while back, here on Freakonomics (I think), a study was published about heroin addicts. These addicts were GIVEN heroin every day. They no longer had to worry about that matter. It was found that this made a vital difference in the addict's life. Now addicts could focus on their life...instead of their addiction. Some started looking further into the future than the next hit, etc.

There will ALWAYS be abusers. While most guys who drink might tend to get a "nice buzz" while watching TV, there will be the one guy who, unable to control himself, will drink until he is lying in his own vomit. THESE are the people we have to work on. Same with narcotics. It's not the man/woman who sits at home after work with a nice high...it's the person who gets so stoned that he thinks he's a bird and can fly off the top of skyscraper. (Of course, with narcotics, there is the added negative influence of it being illegal--making otherwise decent people into criminals--and, no, I'm not an addict, nor do I even have access to such drugs.)

Habitual and addicted--that's a fine line to draw. I think a better distinction might be habitual/addicted vs. ABUSER. At least that's how I see it. Thank you for your comment!

A corollary to gratification now versus gratification later is the discount applied to punishment: delayed penalty is heavily discounted. When there were a spate of restaurants and shops being the victims of armed robberies, the police advised that the best prophylactics were the ones that would result in the criminals being caught in the act - better visibility in to the shop from the street, better lighting, etc. Measures like video cameras, which help the police to catch them after the fact, were thought (by the police) to have little deterrent effect, because they didn't pose a barrier to the immediate success of the crime.

I meant to say, a spate of armed robberies in Oakland, California. Two years ago IIRC.

Obviously they want the money now so they can use it to buy cocaine now...

I am not sure what the conclusions and implications of this study are. Is is that cocaine users have discount rates like everyone else? Did the authors consider the possibility that the users might just take the money now and spend it all on cocaine? The authors suggest that drug treatment programs should be longer to decrease rate of relapse. Is this new knowledge?

It seems to me that the "preference" and the reality would be different. In other words, when actually presented with the drug and cash, and actually seeing them would greatly influence their perception and decision making abilities.

The fact that these folks are in a treatment environment means that they are already predisposed with a preference to not use the drug in general, which I would think skews the results, albeit positively.

The physiological response to the presence of the drug is what most addicts have difficulty overcoming I think (I am no expert though) - they react quicker than their preferences can talk them out of it.