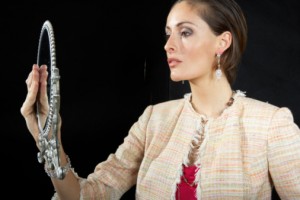 Generally speaking, narcissists tend to do well in life. Which is strange, since we usually look down on traits such as arrogance and inflated self-image. And yet, for all the reasons we hate them, society usually rewards narcissists in one crucial category: leadership. For some reason, even though we claim to see through all the trappings of self-love and big egos, we tend to think that narcissists make good leaders, and in group settings, consistently lift them to positions of power. Apparently, we’ve been duped. While narcissists may look like good leaders, according to a new study by a group of psychology researchers from the University of Amsterdam, they’re actually really bad at leading.

The study is due to be published in the October issue of the journal Psychological Science. Here’s the abstract:

Although they are generally perceived as arrogant and overly dominant, narcissistic individuals are particularly skilled at radiating an image of a prototypically effective leader. As a result, they tend to emerge as leaders in group settings. Despite people’s positive perceptions of narcissists as leaders, it was thus far unknown if and how leaders’ narcissism is related to the actual performance of those they lead. In the current paper we used a hidden profile paradigm to provide evidence for a discord between the positive image of narcissists as leaders and the reality in terms of group performance. We proposed and found that although narcissistic leaders are perceived as effective due to their displays of authority, leaders’ narcissism actually inhibits information exchange between group members and thereby negatively affects group performance. Our findings thus indicate that perceptions and reality can be at odds, which has important practical and theoretical implications.

The study is based on the Hidden Profile paradigm. Researchers recruited 150 people and put them into groups of three. One person was randomly chosen as the group’s leader, and each group was assigned a task: choosing a job candidate. Everyone was told they could contribute advice, but the leader was ultimately responsible for making the decision. Of 45 items of information about the candidate, some were given to all three, and some to only one of the participants.

From the Psychological Science press release:

The experiment was designed so that using only the information all three were privy to, the group would opt for a lesser candidate. Sharing all the information, including what each possessed exclusively, would lead to the best choice. Afterwards, the participants completed questionnaires. The leaders’ questions measured narcissism; the others assessed the leaders’ authority and effectiveness. All checked off the items among the 45 that they knew—indicating how much the group had shared—and rated how well they’d exchanged information. Experimenters tallied the number of shared items, noted the objective quality of the decision, and analyzed these data in relation to the leader’s narcissism.
As expected, the group members rated the most narcissistic leaders as most effective. But they were wrong. In fact, the groups led by the greatest egotists chose the worse candidate for the job. Says [lead researcher Barbara] Nevicka, “The narcissistic leaders had a very negative effect on their performance. They inhibited the communication because of self-centeredness and authoritarianism.”

This is in a way similar to a study we reported on a few years ago, finding that we prefer confidence over expertise.

Wow, that was a really well designed experiment.

Fantastic read. Reminds me of Darren Rovell, sports "reporter" at MSNBC, and his inane tweets and Rules of Twitter that he often breaks, yet he has a big following who can't see through his BS.

In "The Man Who Lied to His Laptop," Clifford Nass made a similar case, but without the nod to narcissism's being a human failing - he seems to celebrate it being somewhat narcissistic himself.

Modesty, it seems, is a lousy policy. According to his book, you should never give an evaluation of your weaknesses as people will tend to take you at your word on them. Better to just tell everyone you're the best.... It's better to be all hat and no horse, than to be an expert horseman with no hat.

What I wonder is, is this a sign of the age. Are we simply in a period where narcissism has its own rewards? Or, has this always been the case, a symptom of a world where class structure made nodding to modesty a virtue that only the elites could enjoy as symbol of their birth right?

Quote: "While narcissists may look like good leaders, according to a new study by a group of psychology researchers from the University of Amsterdam, they’re actually really bad at leading."

Well this is no news. If you have read "Good to Great" then you already know that good leaders are humble and absolutely not narcissistic.

Howard Hughes vs. Noah Dietrich, leader vs. manager. you need both of them to win. apple was in the dark without Steve Jobs despite having its original founders and managers.

You are assuming Hughes or Jobs were/are narcissists. You can be a big personality, creative, and highly motivational without being a narcissist. Success of course breeds a degree of self-centeredness if it was not already there. Regardless, at least some of what I have seen on Jobs does not indicate that he is overly authoritarian. You can be highly compelling without being authoritarian and snuffing out the insight and creativity of those around you. Good leaders bring that out more in their people.

I saw this movie: it's called "Patton."

Adolf Hitler really seems the poster boy for this. He thought the world of himself, attracted a fanatical following, and made really bad decisions.

I think narcissists look good on paper, which is what this study seems to have determined.

To anyone that has worked with a true narcissist, they rapidly become a cancer to any team, taking credit for other's ideas and accomplishments and suborning team goals for their own advancement and glory.

Put in a dictator role, like an entrepreneur, they can have a good run, but they hit a glass ceiling where their drive and intelligence smacks against the wall of them having to develop a second layer of empowered execuitives. I worked in Silicon Valley as a consultant during the heyday, and saw it again and again...the brilliant driven guy grows organization to a certain size, then, inevitably, kicked out by the VCs because he couldn't lead beyond the point where it wasn't all about him anymore. A Stephen Jobs is the exception that proves the rule, compared with all the other technology narcissists who crashed their companies.

I think the problem is that we're hard-wired to seek the kinds of people who would be good at leading a charge into battle. In that situation, you need someone to convince all the tribesmen to charge at the other tribe even though it could very well lead to their deaths. But this type of person is not a good decision maker, generally speaking, and a modern leader's responsibilities have more to do with decision making than with leading charges.

I also question how true this would hold out in the long term. Eventually, people realize the person is a bad leader and try to get rid of them. The trick, for the leader, is to get power quickly enough that you can't be easily ousted by the time people realize they need to oust you. (I think that last statement describes most of recorded human history.)

This is a great point. Try to remove a narcissist (e.g.: war chief) from power and watch how that works.

Its scary to see that people tend to follow those that are self-interested and ultimately adverse to group productivity. People seek certainty, so its really no surprise that the unapologetic, boisterous individuals are immediately categorized as leaders. Fortunately, these studies provide evidence that counter the assumptions that stereotypical leaders are actually effective "leaders." Lets just hope that people can see past the aesthetics and elect effective officials based on their policies rather than their persona.

Someone who isn’t a good leader came out with this study. It’s like the employees blaming management for sucking and saying they could do a better job. The results have an inherent bias in them.

The reality is most people aren’t good leaders but if they can get the proles to vote for them then whose fault is it?