We’ve blogged a few times about the clever use of what you might call reverse incentives — that is, turning someone else’s unwelcome behavior into a positive outcome for yourself. Planned Parenthood turned abortion protestors into a fund-raising scheme; a comedian used this same “pledge-a-picket” tactic against the Westboro Baptist Church. 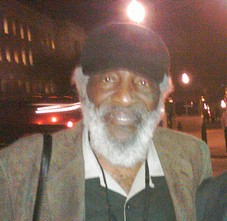 I recently ran across an older example, from the groundbreaking comedian and activist Dick Gregory, probably still best known for his autobiography, called Nigger.
The book was co-written by Robert Lipsyte, a longtime Times sports-and-culture columnist whom I interviewed recently for an upcoming podcast about booing. In Lipsyte’s rousing, fascinating new memoir, An Accidental Sportswriter, he writes about his collaboration with Gregory (whom he calls Greg), and the latter’s shrewd understanding of human nature, incentives, and hatred. Excerpts:

“Last time I was down South, I walked into this restaurant, and this white waitress came up to me and said, ‘We don’t serve colored people here.’
“I said, ‘That’s all right, I don’t eat colored people. Bring me a whole fried chicken.’
“About then these three cousins come in, you know the ones I mean, Klu, Klucks, and Klan, and they say ‘Boy, we’re giving you fair warning. Anything you do to that chicken, we’re going to do to you.’ So I put down my knife and fork, and I picked up that chicken and I kissed it.”
Sometime early in the first Playboy show a heckler in the back yelled, “Nigger!” Greg said, “Say that again, please. My contract calls for fifty dollars every time that word is used.”

Once we decided on the title, Nigger, he held his ground against the publishing house. I loved his dedication: “Dear Momma — Wherever you are, if you ever hear the word ‘nigger’ again, remember they are advertising my book.”

I enjoyed campaigning with him, especially when a street hustler would sidle up and ask what he could do to help. Greg would laugh and say, “Really be something else if the rumor got out that Mayor Daley’s precinct captains were paying $20 a vote this year, then, when they come around with the usual $2, folks be so mad they run him out of town.”