Give Me Liberty, or Give Me Steps 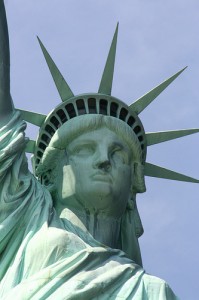 James Barron and Sydney Ember write in the New York Times about the upcoming closure of the crown of the Statue of Liberty. If you are skeptical of how the government spends money, this article will fuel your fire.
Barron and Ember write:

Interior Secretary Ken Salazar says it [the crown of the Statue of Liberty] needs a $27.25 million renovation for additional safety improvements that he promised in 2009.

My guess is that, even by government standards, this is a project where the safety benefit per dollar spent is miniscule, or non-existent.
The article continues:

Mr. Salazar called the renovations “a major step in bringing a 19th-century icon into the 21st century.” The Park Service said the project would involve updating the statue’s mechanical and electrical systems, along with its fire-suppression equipment. The two open staircases will be separated from each other,  and one will get walls, a plus for safety. The elevator that runs from the ground floor to the fifth floor will be replaced and will ascend and descend in a new, fire-resistant shaft.

One might presume that in order to justify closing this part of the monument for a year and spend $27.25 million to improve the safety, the existing situation in the Statue must be quite dire.
Apparently not.
Describing the crown, the superintendent of the monument has this to say:

“It’s safe now, but it will be so much safer when we’re done.”

If none of the millions of visitors each year is getting hurt now (which is my guess), how can you make it any safer?
(Hat tip to Jeff Thomas)