Our Future Looks Fat: Study Predicts Nearly Half the U.S. Population Will be Obese by 2030 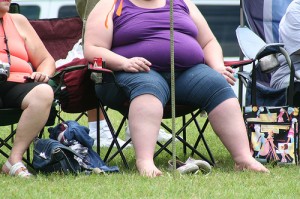 The results of a new study by public health researchers at Columbia University and Oxford University forecasts that by 2030, there will be an additional 65 million obese adults living in the U. S., and 11 million more in the U.K. That would bring the U.S. obese population up from 99 million to 164 million, roughly half the population.
The findings suggest that as a result, medical costs associated with the treatment of preventable diseases (diabetes, heart disease, stroke, cancer) will increase somewhere between $48 billion and $66 billion per year, in the U.S. alone
The study, published in the Aug. 27 issue of The Lancet, was led by Y. Claire Wang of Columbia’s Mailman School of Public Health. From Slash Food comes this map of obesity rates by state. Currently, roughly one-third of Americans are obese. Any guesses as to what this map will look like in 2030? 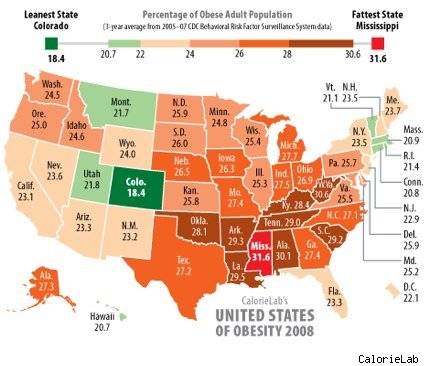 Ans here are some of the study’s depressing highlights:
In the U.S.:

Now, maybe I’m being naive, but I refuse to believe that within 20 years, half the U.S. population will be obese. Here’s to hoping this is one prediction that doesn’t come true.