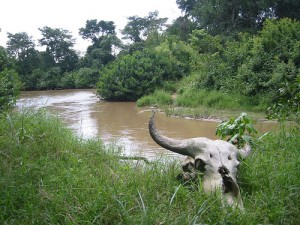 A number of months ago I wrote a blog entry on the requirement in the Dodd-Frank bill, put in by then-Senator (and now Kansas governor) Sam Brownback, prohibiting the purchase of “conflict minerals”—those that might be used to finance warfare in Africa, particularly the Congo. I noted the very simple economic point that this would create a surplus that would drive prices down, mostly harm local miners, but benefit buyers/countries without U.S.-level scruples about these purchases.
I shouldn’t brag—any Econ I student could have seen this point; but it is nice, albeit depressing, to see this prediction come true. From David Aronson in the New York Times:

Unfortunately, the Dodd-Frank law has had unintended and devastating consequences, as I saw firsthand on a trip to eastern Congo this summer. The law has brought about a de facto embargo on the minerals mined in the region, including tin, tungsten and the tantalum that is essential for making cellphones.
The smelting companies that used to buy from eastern Congo have stopped. No one wants to be tarred with financing African warlords — especially the glamorous high-tech firms like Apple and Intel that are often the ultimate buyers of these minerals. It’s easier to sidestep Congo than to sort out the complexities of Congolese politics — especially when minerals are readily available from other, safer countries.
For locals, however, the law has been a catastrophe. In South Kivu Province, I heard from scores of artisanal miners and small-scale purchasers, who used to make a few dollars a day digging ore out of mountainsides with hand tools. Paltry as it may seem, this income was a lifeline for people in a region that was devastated by 32 years of misrule under the kleptocracy of Mobutu Sese Seko (when the country was known as Zaire) and that is now just beginning to emerge from over a decade of brutal war and internal strife.

Brownback’s provision has harmed precisely those it was designed to protect, the small-scale miners in the Congo, but it has certainly lowered the price faced by Chinese processors for these inputs. Law of unintended, but what should have been perfectly expected, consequences.