How Does High Unemployment Affect Wages of Those Who Remain Employed? 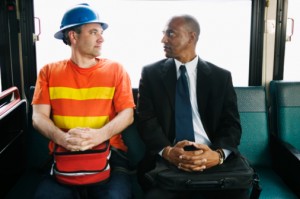 Of course higher unemployment generally raises jobless rates for everyone: men, women and minorities. But how does it affect the wages of workers who keep their jobs? I believe a new paper that I coauthored with Jeff Biddle is the first to use large amounts of data to address this question about cycles in wage discrimination.

Using CPS data from 1979-2009 we examine how cyclical downturns and industry-specific demand shocks affect wage differentials between white non-Hispanic males and women, Hispanics and African- Americans. Women’s and Hispanics’ relative earnings are harmed by negative shocks, while the earnings disadvantage of African-Americans may drop with negative shocks. Negative shocks also appear to increase the earnings disadvantage of bad-looking workers. A theory of job search suggests two opposite-signed mechanisms that affect these wage differentials. It suggests greater absolute effects among job-movers, which is verified using the longitudinal component of the CPS.

Even though women’s unemployment rises less than men’s in most recessions (4.4 vs. 6.5 percentage points in this recession), employed women’s wages fall relative to men’s in bad times; same for Hispanics. But although African-Americans’ unemployment rises more than whites’ (8.3 vs. 4.8 percentage points in this recession), the wages of employed African-Americans rise slightly more than whites’ wages in bad times. So maybe things even out a little bit—and ethnic/racial/gender differences over the cycle are not so severe as looking only at unemployment changes would suggest.

"...the wages of employed African-Americans rise slightly more than whites’ wages in bad times..."
One possible explanation could be that the african-american who looses their job are of the lower wages bound and simultaneosly the whites are of the upper bound?

I was thinking that a higher percentage of Blacks are in government jobs where wages are more stable.

Hey! I had Biddle for Labor Economics back in the late 80s! Glad to see he's still at MSU! A WONDERFUL teacher.

Could this not just be an effect of which jobs tend to be lost? If lower paying jobs are disproportionately lost during a recession then you should see this result if Blacks and Women make up a larger proportion of the lower paying jobs (which they do).

"Of course higher unemployment generally raises unemployment among men, women and minorities." Because lord knows minorities are neither men nor women. Why not just say of everyone?

"Men, women and minorities." I am glad that I was not the only one who noticed this inane statement.

Liberal thinking is so ingrained in looking at race that they don't see minorities as human beings.

I don't know that it is liberal thinking per say (though there is much to criticize about the patronizing attitude many liberals take towards "minorities" and I say that as a liberal myself), since I'm not sure Daniel is particularly liberal. Personally, I just think he's a buffoon who types before he thinks and never addresses his critics (though that is a general problem with the Freakonomics guys).

Can't one reach this conclusion by thinking about the matter? Can it be quantified or plotted against the unemployment rate? How much and for how long does high unemployment - jobs at a premium, with a 'surplus' of workers - affect wage growth? Should the minimum wage be raised when unemployment is high, so that there is an incentive to keep current employees, rather than sell them out to buy lower-priced replacements on the open market? People who have jobs during such times have a dubious distinction - they have no way to realize the 'premium' that their ownership of a job holds, other than to muse about the bills that would pile up if they lost it and the difficulty of finding a new one. On the other hand, their employer has every incentive to, in effect, sell them short by interviewing cheaper candidates behind their back!