With Libya finishing off a bloody revolution, the war in Afghanistan nearly a decade old, and Mexico engulfed in a savage drug war — it might not seem like it, but we’re living in the most peaceable time in history. That’s more of a commentary on just how violent our past is, rather than the tranquility of the present.

In his new book, The Better Angels of Our Nature: Why Violence Has Declined, Harvard psychology professor Steven Pinker lays out the difference in stark contrast, quantifying the dramatic decrease in violence over the ages, and uncovering the reasons for its decline. Pinker operates under the premise that the past is like a foreign country, and that we need to be reminded of its brutality. Starting with a tour of human history that stretches back to 8000 BCE, Pinker offers glimpses along the way, and shows how in the early going, violence persisted even as society and culture evolved. 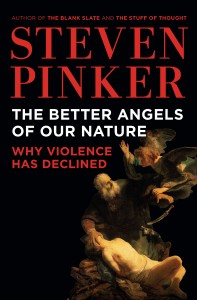 A critical transition took place as humans abandoned  nomadic tendencies (a brutal, violent existence for sure) and settled into communities based around agriculture. And yet, the early governments that cropped up were equally as violent, if not more so. Some of the most brutal acts of history have been state sponsored, a hallmark that lasted roughly until the Enlightenment, when torture and slavery were slowly outlawed.

Pinker quantifies the decrease in violence with a truckload of data, smartly presented in more than 100 charts and graphs, depicting things such as homicide rates in Medieval Europe, rates of battle deaths in state-based conflicts, literacy and income levels over time, and even the amount of violence depicted in a 1940s bodybuilding ad. He also cuts against conventional wisdom with an in-depth examination of the 20th century, thought by many to be the most violent century ever. In what he refers to as the “Long Peace” — the world  post-1945 has become dramatically less violent. And even in this age of “The Global War on Terror,” Pinker shows that the rates of death from terrorism are below where they were in 1970.

Pinker has kindly agreed to answer reader submitted questions. So, as always, fire away in the comments section.

haven't read ur book, but thanks for the justification for an optimistic look at progress- my question: are (international) violence numbers inversely correlated to stratification of armaments?- that is, might part of the reason for overall decreased violence be that 1 nation has far and away the most military might, some wealthy nations have enough to hold their own, while the vast majority of nations have essentially cardboard tanks- so the majority of countries might be too scared to initiate international violence, and even if they do, the combat to squash the military capability is much swifter when one side has a huge advantage

That might explain some of the reduction post-cold war, but that's only about 20-30 years and doesn't explain the longer trend. So I doubt it would have made much of a difference.

1. How would you describe the role of religions and spirituality in this "Long Peace" since 1945? Is there a continuing place for them going forward?

2. In light of this history, is the War on Terror justified, even acknowledging some significant missteps (say, the invasion of Iraq)? If so, why? If not, what would have been a more appropriate response to 9/11 and why?

3. Beyond the strictly pragmatic or utilitarian, do you think there is any warrant or justification for morality and judging when physical violence (especially killing) is appropriate or allowable? If so, what is it?

I feel a little silly asking questions when I haven't read the book, but here goes ...

Has sports had an influence, one way or another, on the level of violence? Does a rivalry between countries temper the tendency to violence and war, or does it increase it? Does it depend on circumstances, and how?

Should there be Crips vs. Bloods basketball games on a regular basis?

Any thoughts on the negative side effects of decreased violence?

Not to say that violence is preferable, just wondering about the downsides of peace.

Why do you hate Malcolm Gladwell?

The big red flag that always worries me about Gladwell is that the more I know about the topic he is writing about the more naive slapdash and ill-informed his opinions seem to be.

He is an excellent writer, but when he strays into fields I know well I can tell he is simply enthused about one particular "expert's" perspective and is complete naive as to the full state of things. He also has a tendency to make sweeping conclusions that are not really justified by the information at hand, but make for flashy narratives.

I would guess this is what has grated on Pinker.

This is definitely an accurate statment, 100% agree with it.

Do you believe the overall decline in violence is supported by democratic peace theory, that democracies rarely, if ever, go to war? What about the effects of globalization and the financial tying of many countries?

Is it possible this "Long Peace" is merely the calm before the storm? World War II happened less than a century ago and was by far the highest casualty war in recorded history (if Wikipedia is to be trusted, of course). I've been reading G. K. Chesterton lately, and he had some choice words about the false hope of progressive morality...and he was writing before both WWI and WWII.

Point of Conjecture: I once heard that it was exceeding rare to have violence in topless bars. True?

Other than writing best-selling books what can people do to help society at large resist the urge to think things are worse and worse and the world is less and less safe when this is manifestly not the case?

A small portion of the population is willing to be reasoned with, but when I tell my reasonably intelligent sister that "children are probably safer today than at any time in human history" she scoffs at me as if I am telling her that cigarettes have nothing to do with lung cancer. She is so dismissive she won't even read the few things I have given her about it, and her attitude is not uncommon.

No fair! I won't have time to buy & read his new book while I still have the chance to ask Dr. Pinker a timely and intelligent question.

So I'll ask a stupid one instead: What's with the hair?

"... as humans abandoned nomadic tendencies (a brutal, violent existence for sure)"

Why? At first glance, at least, it seems that a nomadic existence would offer much less occasion for human-on-human violence. As a nomad, if you don't like the neighbors, you can just leave - something that's not true when you're confined to a town or city, or bound to farmland.

Mine is no expert opinion, but I would guess that the nomadic existence lends itself to violence with regard to the prime real estate. Nomads don't move arbitrarily, but because they have exhausted the resources in a particular location, or perhaps they are following weather-driven herds. Just because you can move doesn't mean it's desirable to move. It's expensive in terms of energy consumed and lost productivity, and it's done on the expectation (but certaainly not a guarantee) that conditions will be more favorable in the next place.

If other nomads are depleting the same food or other resources, or polluting the water sources from upstream, the group that has to move would probably be determined as a result of violence between the two.

The existence of a town, or of continuously occupied farmland, suggests some level of social order, and a common understanding of "property" to make those constructs possible. They don't necessarily rule out violence as a means of resolving disagreements, but they make reasonable alternatives to violence available and desirable.

Some thoughts and questions....

1) I noticed your book cover is of Abraham's attempted sacrifice of Isaac being stayed by the angel. That painting could seem to depict ancient violent tendencies (especially as related to religion)...and also, at the same time, offer some revelation that "God is not like that." Why did you choose that painting for your cover?

2) I have wondered if MMA fighting actually offers us a way forward in violence. Two men beat each other terribly...but if one taps out, or is knocked unconscious, the bout is over. It seems that is somewhat like "Rule of War" writ small.

3) IMPORTANT: From all of your research into violence, what is the number one (and perhaps two) simple things that the world can do to reduce it even more dramatically?

4) RELATED: What are the things we do that CAUSES more violence in the world.

I loved your ted lecture.
http://www.ted.com/talks/steven_pinker_on_the_myth_of_violence.html
You do an amazing job explaining how modernity has led to a precipitous decline in violence. What explains the relatively high level of violence in the United States compared to other developed nations? The US's intentional homicide rate is 3-4x most other developed nations in Western Europe, Australia, Japan.
Guns? Frontier history? Income inequality?

Is there value in thinking that the world is more violent than it used to be? Does the misconception motivate people to think of ways to reduce crime, or does it motivate people to solve problems incorrectly? My guess is that as with most things the closer we are to the truth, the better off we are... so put another way, has this misconception about the violence and the past led to any policy failures?

How has gun ownership affected violence? Is it positively or negatively correlated with violence? Does the type of gun matter?

I saw Pinker speak about this book at Harvard. Like a lot of his writings, his research here is aimed at discrediting certain counter-enlightenment traditions and tries to provide empirical footing to some idea of 'progress.'

I'm sure both of these factors have been internalized into many of our political institutions. But I am curious to hear his thoughts about the causal mechanisms for the decrease in violence, and, relatedly, what reasons we have for thinking those institutional changes will persist if material factors start changing. (i.e. what if we start experiencing shortages of vital resources?)