Can You Copyright a Football Play? Ask Bill Belichick

Just about a year ago we posted about the incredibly innovative game of football. As we described, all of the innovation we’ve seen in football – the spread offense, the zone blitz, the wildcat, and dozens of other offensive and defensive formations, strategies, and counter-strategies – occurs without anyone ever asserting ownership. Rival teams are free to copy new plays, and they do.

It’s not as if ownership would be impossible – existing intellectual property rules might cover at least some football innovations as copyrightable “choreographic works,” or as patentable processes. The fact remains, however, that no one has ever tried to copyright or patent a new play or formation. 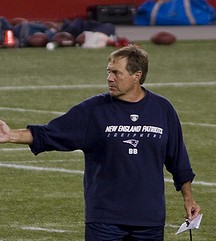 A new football season has started, and with it, another football innovation. This time it’s the Buffalo Bills, under head coach Chan Gailey (who has a strong reputation for offensive innovation). The Bills are using a new offensive formation that builds on an earlier innovation that’s usually credited to New England Patriots head coach Bill Belichick (although Belichick’s sole authorship has never been established). Belichick’s Pats often run an offense that foregoes running backs in favor of extra receivers pushed up close to the line of scrimmage and running unconventional routes.  The extra receivers swarm the secondary, overloading the defensive backs, and creating openings that Tom Brady (the Patriots’ quarterback) is usually able to exploit.

The Bills have tweaked the Pats’ innovation by mashing up Belichick’s extra-receivers formation with a move that every kid who plays pick-up basketball knows: the pick. Setting picks – i.e., using one receiver to obstruct a defender’s access to another receiver who is not carrying the ball – is generally against the rules in football (it is treated as offensive pass interference). But there is a loophole. If the pick is the result of the receivers’ normal passing routes, it won’t draw a flag.

The Bills aren’t the first team to set picks – the San Francisco 49ers under Bill Walsh were adept at setting picks as part of their West Coast offense. Other teams have done it as well by bunching receivers.

But the Bills have now advanced the state of the art, ingeniously, by “stacking” receivers at the line of scrimmage. Here is a picture of the stacking formation from a recent article in the Wall Street Journal. Unlike previous “natural” picks, which depend on exact timing of receivers’ routes, in the Bills’ stacking formation the first receiver can more easily set a pick because the receiver directly behind him is running a following route — at least until the pick is set and the second man veers off, away from the blocked-out defenders. Ironically, this is the formation that the Bills used to beat Belichick’s Pats last Sunday, 34-31.

That last bit illustrates our point nicely. Bill Belichick innovated, but others followed. Belichick knew that he would be copied, and, even more importantly, that his rivals would tweak – and perhaps improve upon – his innovation. And then turn that improvement against him, as the Bills did last Sunday.

And yet Belichick, and dozens of great football coaches over the years, continue to be creative. Why? Professional football is the apotheosis of cutthroat competition. In the NFL, innovations can pay even if they provide an advantage over only a few games (although for reasons we’ve explained, copying a football coach’s innovation effectively is often more difficult than it may at first appear). A few extra games in the win column are the difference between a decent season and playing in the Super Bowl. And even one Super Bowl win turns a coach into a hero. That gleaming, buffed Lombardi trophy prize drives innovation in football more surely than any rule of intellectual property.

1. Almost all football innovation first occurs at the high school level, so it would be nearly impossible for coaches to assert (without lengthy and numerous legal challenges) ownership of a play. Look at the numbering system for positional alignment along the defensive line - no one has the guts to change it because Bear Bryant did it that way, and even he credits a high school coach with coming up with the numbering system.

2. The NFL wouldn't permit it, or require for all participants in the league to give automatic license to the league in order to protect competitive balance, a critical component of the league's commercial viability.

Stacking WRs in the spread is not a new innovation. Among other teams, the Pats and the Colts have done quite a bit of this in the last decade.

I knew this article would disappoint when they spelled his name wrong in the title. His name is spelled Belichick. Bad things happen when lawyers try to be interesting.

Going back to copyrighting plays, it would be hilarious to let chess players copyright their innovations. Of course showing that they were the first to employ that move would be nearly impossible.

You know, I'm oftentimes bemused by this site's inaccuracies regarding AGW/ecological issues. Yesterday's assertion by one of our hosts that the FDA is of limited usefulness (and modern medicine doesn't need a federally mandated governing body.) I'll let the Texas wildfires and the existence of Fen-Phen/Vioxx counter those two assertions, and as center-right corporatists are wont to say 'leave it there.'

Is unconscionable. As a GT fan, my preferred shorthand for 'mediocre/unimaginative' to call it Chan.

Fen-Phen/Vioxx don't counter the assertion that the FDA is of limited usefulness...those 2 examples actually support the assertion. Those problems occurred under the watchful (and expensive) eye of the FDA.

Chaz is bang on. If by some accident an NFL team came up with some never-fail scheme that constituted copyrightable intellectual property, the NFL would have to instantly ban it, or compel the team to give the license to the league, to maintain the competitive balance. Same goes for any league - imagine only one baseball team allowed to throw curveballs? Wouldn't happen.

From a strictly legal perspective, I'd be more worried about patent law than copyright law. The patent office has gone so goofy in the last few years in what they'll allow (see patent 6,368,227 for an example), Belichick might have more luck patenting his plays than copyrighting them.

The Bills won more on defense (4 interceptions) than offense. However, their offense certainly helped to overcome the Patriot's 31 points.

Wish my Broncos would be a bit more innovative.

I don't pretend to know much about copy-write law but I seem to remember that you can't copy-write an idea, only the description of an idea, i.e., I could copy-write a book about an innovative football offense, but not the offense itself. In any case, lining up a step closer to the sideline or the center of the field, or closer to the line of scrimmage or further from the line of scrimmage would be considered a different play. Also, as someone pointed out, it would be next to impossible to prove that a particular play or formation,had never been used before.

I have been creating offensive football offenses for 40 years. I gave them to coaches in order to get an assistants job or at least a publishing deal. I am sitting on several innovations which I refuse to give away. I have the ability to virtually determine the outcome of any football game including the Super Bowl. My Power Spread Offense I gave to Sam Wyche which he used to take the Bengals to the Super Bowl. In an interview he called me a "crackpot." I contacted several lawyers which informed me it would be impossible to sue the NFL or the Bengals. The copyright office informed football plays are not protected my intellectual property laws because they are considered "ideas." I have been turned down by every form of media. Sportswriters and sportscasters have told me it would be career suicide for them to do a story about me, as they believe coaches would boycott them. What is interesting about football is that the strategies and tactics used on the battlefield are the same as those used on the football field. The army football team should take note. By the way, Jim Young used my version of the wishbone offense when he took Army to the Sun Bowl.