A Subway Ride to the Past — Compliments of Nucky Thompson 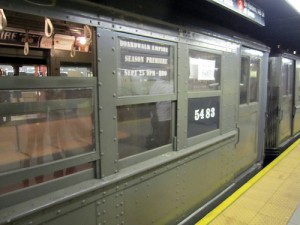 This past weekend, I was waiting for the subway when an old, 1920s-era train pulled to a stop on the express line. My first thought was that it was one of those worker trains you sometimes see (especially on weekends) that ferry MTA crews along the line as they make repairs. But passengers were getting on. Guys in MTA gear hauled open the manually sliding doors and did an old-fashioned call-out: Downtown express train. Next stop 72nd Street. Getting on seemed the obvious thing to do. It helped that neither I nor my wife had seen the news that HBO paid the MTA $150,000 to run a 1920s-era vintage subway train up and down the express line, as a way to promote the second season of Boardwalk Empire.
So the effect was as they’d intended: stupefaction, followed by slow realization, followed by total bemused wonderment. It felt like being at an amusement park. I was amazed at how fast it went, how comfortable the seats were (compared to the current plastic ones), and how loud it was with the windows down. Here’s a video:

As marketing gimmicks go, this was a good one. Considering the millions that HBO spent promoting Boardwalk Empire, breaking off $150,000 for a completely original, interactive experience, seems well worth it. This money perhaps went the farthest in terms of influencing people to watch or at least be interested in the show. And, according to the WSJ, the idea came from the MTA.
Completing the experience, guys dressed in period paper-boy attire stood outside the 72nd Street Station, offering free subway passes marked, “Compliments of Nucky Thompson.”
If only I had HBO.