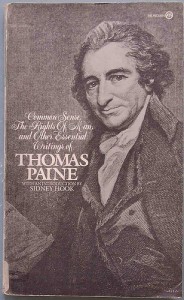 In 1776, one book, written in complex language, sold over 120,000 copies in Colonial America. That number does seem large on its own. However, to give it even more meaning, I like to convert it to an equivalent number today.
This conversion is a task for proportional reasoning—one of my favorite tools for finding meaning in the numbers that surround us. First convert 120,000 into a fraction of the U.S. population in 1776: compared to the population at the time of 2.5 million, 120,000 is roughly 1 in 20, or 5%. Today’s U.S. population is about 300 million—of which 5% is 15 million.
Fifteen million copies today! More surprisingly, Common Sense by Thomas Paine sold this equivalent in just three months. In its first year, it sold 500,000 copies, or 20% of the colonial population.
Today’s equivalent is 60 million copies. On Wikipedia’s list of bestselling books, all books that have sold that many or more copies have done so over a much longer time. The shortest time is 8 years, for The Da Vinci Code; several others, such as Heidi, were published in the 19th century.
Another surprise arrives upon opening Common Sense: the sophistication of the writing and reasoning. Here are a few sentences:

As a long and violent abuse of power, is generally the Means of calling the right of it in question (and in Matters too which might never have been thought of, had not the Sufferers been aggravated into the inquiry) and as the King of England hath undertaken in his Own Right, to support the Parliament in what he calls Theirs, and as the good people of this country are grievously oppressed by the combination, they have an undoubted privilege to inquire into the pretensions of both, and equally to reject the usurpations of either.
The laying of a Country desolate with Fire and Sword, declaring War against the natural rights of all Mankind, and extirpating the Defenders thereof from the Face of the Earth, is the Concern of every Man to whom Nature hath given the Power of feeling; of which Class, regardless of Party Censure, is The Author.
Society in every state is a blessing, but government even in its best state is but a necessary evil; in its worst state an intolerable one; for when we suffer, or are exposed to the same miseries By a Government, which we might expect in a country Without Government, our calamity is heightened by reflecting that we furnish the means by which we suffer.

Each sentence is longer than a whole soundbite of today.
Furthermore, in 1776 literacy was not universal. Therefore, many colonial Americans had the book read to them. The sales figure of 500,000 copies thus underestimates the number of people who attended to its message.
And what a message! Can you imagine a book with such a complex style today selling 60 million copies in one year? To ask the question is to answer it. To make the comparison concrete, here are data from the National Assessment of Adult Literacy (NAAL), which measures the English literacy of adults across the United States. Prose literacy, defined in the study as the ability to “search, comprehend, and use information from continuous texts,” is categorized into four levels: below basic, basic, intermediate, and proficient. Proficient, the highest level, is defined as “reading lengthy, complex, abstract prose texts as well as synthesizing information and making complex inferences.” As an example of this level of performance, they cite comparing the viewpoints in two texts. This level seems to be roughly the level required to read Common Sense.
In the extensive NAAL survey, only 13% of adults attained this level. Thus, the proportion of Americans today who are able to understand Common Sense (13%) is smaller than the proportion that bought Common Sense in 1776 (20%). Are we a nation in decline?
(I am indebted to John Taylor Gatto’s article “The seven-lesson schoolteacher” for the idea of measuring colonial literacy using Common Sense.)