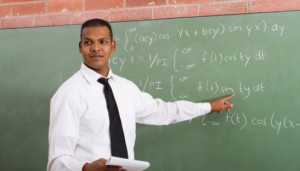 When it comes to achievement, does it matter if a student and a teacher are the same race? And if so, how much? That’s the essential question posed by a trio of economists in a new working paper, the first to test whether minority instructors have a positive effect on the academic achievement of minority students at the college level.
Their results indicate an emphatic yes, and may hold a partial solution (although a tricky one to enact) to one of the most persistent and vexing problems facing the U.S. education system: the achievement gap between non-minority and minority students. Less than than one-fifth of African-Americans, and less than one-eighth of Latinos between 25 and 29 years-old have a college degree. According to the U.S. Department of Education, only 9.6% of full-time instructional faculty at U.S. colleges are black, Latino or Native American. And yet, these groups make up a third of the college-age population.
Here’s the abstract:

This paper uses detailed administrative data from one of the largest community colleges in the United States to quantify the extent to which academic performance depends on students being of similar race or ethnicity to their instructors. To address the concern of endogenous sorting, we use both student and classroom fixed effects and focus on those with limited course enrollment options. We also compare sensitivity in the results from using within versus across section instructor type variation. Given the computational complexity of the 2-way fixed effects model with a large set of fixed effects we rely on numerical algorithms that exploit the particular structure of the model’s normal equations. We find that the performance gap in terms of class dropout and pass rates between white and minority students falls by roughly half when taught by a minority instructor. In models that allow for a full set of ethnic and racial interactions between students and instructors, we find African-American students perform particularly better when taught by African-American instructors.

From a sample of 30,000 students in nearly 21,000 classes, the authors find that the minority achievement gap shrinks in classes taken with underrepresented minority instructors. While minority students are overall more likely to drop a course, less likely to pass a course, and less likely to have a grade of at least a B, these gaps decrease by 2.9 percentage points, 2.8 percentage points, and 3.2  percentage points respectively when assigned to an instructor of similar minority type.
These effects represent roughly  half of the total gaps in classroom outcomes between white and underrepresented minority students. The benefits are largest among black students being taught by black instructors. The class dropout rate relative to whites is 6 percentage points lower for black students when taught by a black  instructor.
So, in theory, according to these results, we could wipe out a sizeable portion of the minority student achievement gap by hiring more minority instructors. Easier said than done of course. And, as the authors point out, any policy with that explicit aim would likely have negative consequences, since students appear to react positively when matched to instructors of a similar race, but negatively when not.