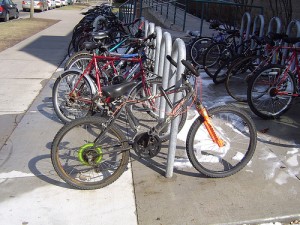 A new working paper examines a program in Boulder, Colorado that attempted to incentivize kids to bike or walk to school over a span of several years. The program began with a $10 cash prize for the first two years, but then switched over to a $10 bike store coupon thereafter. One lucky student who rode and walked to school every day during a “prize period” won the coupon.

Even considering the small, non-cash winnings, biking and walking to school increased 16 percent during the prize period.  Here’s the abstract:

We analyze the effects of a school-based incentive program on children’s exercise habits. The program offers children an opportunity to win prizes if they walk or bike to school during prize periods. We use daily child-level data and individual fixed effects models to measure the impact of the prizes by comparing behavior during prize periods with behavior during non-prize periods. Variation in the timing of prize periods across different schools allows us to estimate models with calendar-date fixed effects to control for day-specific attributes, such as weather and proximity to holidays. On average, we find that being in a prize period increases riding behavior by sixteen percent, a large impact given that the prize value is just six cents per participating student. We also find that winning a prize lottery has a positive impact on ridership over subsequent weeks; consider heterogeneity across prize type, gender, age, and calendar month; and explore differential effects on the intensive versus extensive margins.

This bump in exercise is significant, especially considering the overall downturn in children walking to school at all. From 1969 to 2001, the percentage of self-commuters dropped from 41 percent to 13 percent. In his recent article  pointing this out, Freakonomics contributor Eric Morris ended on an inquisitive note:

“So the next question is, what factors cause kids to walk and bike? And how can we use that information to promote active travel?”

In the Boulder experiment, children who won the lottery were excluded from winning future lotteries, but remained actively commuting to school for the next two weeks. After this, however, they went back to normal. Problematically, the 16 percent increase in walking and biking did not exist during non-prize-periods. But this study, at least in part, offers the beginning of an answer.

I agree with the commenter who said the real issue was the parents. I have a child in 5th grade and we live 3 blocks from his school, albeit with a major street between us. At the start of 4th grade I tried to get him to get himself to school (walk or bike) but he was too timid. At the start of 5th grade I merely informed him that he was on his own. He was still anxious but he did it, and by the second day he informed me that he actually loved riding, and now it's hard to keep him from desiring to make his own way to and from school on those rare occasions I want to take him. Riding a bike to middle school will not be an option for him, but there is a chance that he can ride his bike to the elementary school and catch a bus from there, and he actually is hoping that can work.

Sadly, despite the fact that his school has a student population of 5-600 and that at least a quarter of those students live as close as we do and half live within reasonable walking distance, only 2-3 other kids ride bikes to school, based on the number of bicycles in the racks. I doubt that more than the same number walk, meaning roughly 1% of the population walks or rides, while only a few percent more are bussed, meaning 90+% are driven by their parents. Interestingly, when my son first showed up to school with his helmet on his backpack he was considered quite impressive by his peers. I think the potential exists for more students to commute themselves, but the issue is, as always, parents. Are we going to obsess over "safety" issues which don't exist? Are we going to be willing to be parents and make the tough choices to not always do the "nice" thing, because in the long run the nice thing isn't really nice.

I encourage my neighbors to follow my lead, but to no avail....

disneyland did not reply me