Call It a Comeback: Why Performance Increases When We're Losing 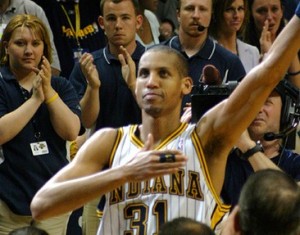 If you were a New York Knicks fan in the mid 1990’s, you surely remember a certain 1995 playoff game in which Reggie Miller scored 8 points in under 9 seconds (two back-to-back three pointers, and two foul shots) to rally the Indiana Pacers to a last-second win over the stunned Knicks. It was a truly sad moment for New Yorkers, made all the worse when the Knicks lost the series in seven games. For whatever reason, some players seem to play better from behind. Reggie Miller certainly did.

A recent study by Jonah Berger of Wharton and Devin Pope of the University of Chicago highlights how being slightly behind is often an advantage. The authors devote a large part of their research to studying 18,000 NBA and 45,000 college basketball games. They also conducted an experiment in which people played competitive games and were given feedback halfway through. During a break in the experiment, someone would come in and tell the participants that they were either slightly behind, far behind, slightly ahead or tied.  The control group was told nothing either way. Berger and Pope found that participants who thought they were slightly behind significantly increased their effort. The authors write:

The results were clear. Effort increased dramatically only for people who believed they were slightly behind in the competition. What’s more, we found a similar effect when we analyzed real-world field data from 60,000 basketball games, including 18,000 NBA games. The relationship between the score and the likelihood of winning was fairly linear. For every two points a team was ahead, its chances of winning increased by about 7%—except for this major discontinuity right in the middle. Teams that were down by one point at halftime were more likely to win than teams that were ahead by one point at halftime. They won as much as 8% more often than they would have if the relationship had stayed linear.

The increase in effort was particularly prevalent for study participants who described themselves as having a “greater belief in their ability.” Being significantly behind doesn’t help performance much – it’s the hope that springs from a slight disadvantage that spurs people and teams to greatness. Feedback helps improvement, as does acknowledging the situation. Taking a break is usually when these two things are accomplished, and breaks are key to improving effort; basketball teams that are slightly behind often come back stronger after halftime.