Confessions of a Racecar Driver

Last week we got an email from a reader named Daniel Herrington. He had just finished listening to our podcast, “The Upside of Quitting,” and wanted to tell us about a big quit he’s been pondering recently. 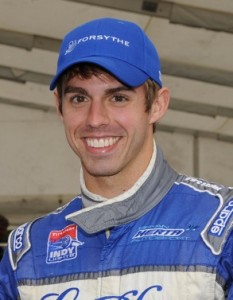 Daniel is a 25 year-old race car driver. He’s also an engineering graduate student at Duke. On the race track, he’s had enough success to keep at it: he’s won at Chicagoland Speedway, and had multiple top ten finishes. But it’s not quite enough to convince him that racing’s the right path. The sport is super expensive; plus, Daniel’s success has been a bit spotty. He’s only completed 2 full seasons in the last 7 years. Keep at it, and he might wind up a star. But he could also end up a middle-aged, burned-out race car driver with no other career to fall back on. So Daniel is hedging and pursuing a graduate degree.

Daniel agreed to answer some of our questions — his answers shed light on the tough decisions many young drivers face, where they have to weigh the considerable risks of the sport against its obvious thrill.

Confessions of a Racecar Driver
By Daniel Herrington

Let me start off with a little background about my career and where I am (potentially) headed. In general, there are a couple different avenues that are possible to explore as a race car driver: stock cars, sports cars and open-wheel (i.e., NASCAR, Le Mans and IndyCar). I have been focused on IndyCar for the majority of my career but am now looking to move towards sports cars for a variety of reasons. There is much more stability in the sports car arena with more manufacturer supported teams and more opportunities to form a lasting relationship as a driver with a company such as General Motors. The manufacturers will always be in motor sports in some fashion so if you work hard and drive well for them, you can have a long career. As time goes on people generally move away from the risky and less idealistic to the more consistent and realistic options – I guess I am no different.

Q How has the recent death of Dan Wheldon affected your thinking over whether to quit your racing career?

A Dan Wheldon’s death is a true tragedy and a loss for the sport and anyone who knew him. I would be lying if I said his death didn’t make me pause to think about how much I am willing to risk to be in the sport. That said, if someone came to me tomorrow and offered me a job driving IndyCars I would say yes. When you invest so much time, energy and emotion into succeeding at something you love, it is amazing what you will tell yourself to downplay the possibility of injury. While I don’t have the numbers to back this up, you may be able to make the case that your odds of getting injured driving along the highway every day for a 9-5 job are higher than those of getting injured in a racecar accident. Death is everywhere if you look for it, so I just don’t look for it.

Q What made you decide to start hedging this decision to split your life between two possible career paths?

A There is a lot of uncertainty in the racing community. I have seen a number of talented drivers not able to make the next step in their racing career and a number of successful drivers unsure about their future. At the same time, I value my education and want to make sure that if I leave racing at 25 or 50, I have a base of education to help me pursue whatever careers or ventures I wish. In many ways, a master’s degree has become the new undergraduate degree so I did not want to pass up an opportunity to continue my education. But the root of my thought process is that graduate school buys me more time to keep pursuing racing while ensuring that I am not falling behind other people my age in applicable experience that could help me land a job outside of racing.

Q So far, how big is the sunk cost you have devoted to racing?

A It would be hard to estimate with dollars what the sunk cost has been to this point. The majority of the dollars that have helped support my career have come from the little bit of sponsorship I have raised. So if you include personal money and money raised from sponsorship, it has probably been around $2 million, probably more. But sunk costs include time and emotional energy as well. I have spent the past 6 years convincing myself that I have a future career as a driver, pitching and selling my persona to companies around the country and trying to motivate myself and others around me to make this distant hope a reality. But racing is not an all or nothing proposition in terms of value gained. I have learned an immense amount through my racing career to date. How many people at 25 have been traveling the country, giving live media interviews, pitching Fortune 500 companies for millions of dollars and helping lead a team of people? If you expend the effort to explore all the different aspects of being a racecar driver, there are many applicable skills that can be applied to a future career.

A Most of the risks are with staying in racing. I am fortunate to have done well in school and feel confident I could find a job outside of racing that I could do well. The risk with a new career is giving up one that I know I enjoy. The way I weigh it is a combination of my enjoyment vs. the probability of having a steady career. With racing I know it is high enjoyment but a low career stability. The most powerful motivator to make a move away from racing is that the drivers in their late 20’s early 30’s who haven’t made a career, are slightly bitter and are working a less-than desirable job.

Q Do you feel it’s possible to make it to the upper echelon of the sport? If so, how has this informed your decision to go to grad school?

A I believe I have the skills to make it in the upper echelon. If I didn’t believe that, I wouldn’t have made it this far and would have switched careers long ago. Every team I have raced for has been interested to work with me again which tells me they think I have potential. Team owners, former drivers and coaches have all written recommendations for me.  But since my career has not taken off I still can’t help but think “maybe I don’t have the requisite talent, skill or ability.” My career has been a collection of a few races here, a few races there, making it very hard to build a rhythm or gain the experience to compete at the next level. So the constant battle I play out in my head is: has my career not taken off due to a lack talent and hard work or due to lack of experience and poor timing? In other words, is it my fault or the universe’s? I find that I can only blame external luck for so long before I start blaming myself.

One of the qualities of being a driver is that to succeed you need a high level of confidence. Whether you show it or not, you need to believe that on any given day you can be the best driver out there. In many ways our mindsets are similar to those of a fighter pilot. This is especially true if you are an up-and-coming driver who hasn’t quite made it in the sport.  So rather than struggling with the possibility of quitting due to lack of skill or talent, it is most common to
hear drivers talk about bad luck or things out of their control. I think that most recognize the probability of failure but we almost treat it like we do accidents: understood but not discussed.

One more point: Racing is addicting. I would love to see a chemical analysis of a driver’s brain while racing and compare that to someone playing the lottery or maybe even doing drugs. It may not be too dissimilar.  Which is why the prospect of quitting is so hard to cope with. I may be a bit idealistic but from the beginning of my career I have said that if all I did was drive cars I would feel like I wasn’t contributing enough to society.  So I always envisioned leveraging my racing career to do something good for the world whether that be charitable work or helping develop a new, lower emission engine technology for an auto manufacturer. It is a bit ironic being a race car driver, but I am intensely interested in the relationship between energy and the environment and improving how we generate and use energy.  So a career away from racing may help me be more effective at making a positive influence on the energy sector.