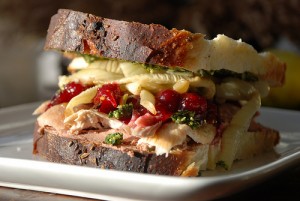 Last week, I was out in Chicago for a couple of days working with Levitt. We had lunch at the Booth School cafeteria (with its great soda design) — or at least we tried to have lunch. There was a nice-looking case of sandwiches, and I asked the guy behind the counter for one of the turkey-cranberry sandwiches.

It was about 2:32 p.m. on a weekday afternoon. The sandwich I was eyeing was one of maybe 15 or 20 in the case. And then the guy behind the counter drags over a big trash can and throws my sandwich into it, and then all the other sandwiches too. It might have been my imagination — or maybe just hunger — but he seemed to take delight in throwing away the food for which I was ready to pay full price.

I’m guessing he had some health-code guidelines he was following, or maybe he just didn’t feel like dealing with another customer at the end of a long day. But my trashed sandwich did make me think of a recent visit to London when I discovered a sandwich chain (does anybody know the name? I can’t recall) that gives away all of its sandwiches at the end of day (maybe 7 p.m.?).

I admired this policy, in that: a) it didn’t waste food; b) it delighted customers; and c) I wouldn’t imagine it cannibalized much business, in that the kind of customer who would time her visit to the giveaway period probably wouldn’t come in at another time to pay full price.

ADDENDUM: To those of you who responded about the British chain — I am pretty sure it was Eat that I was thinking of, but it sure sounds like Pret-a-Manger (which I like a lot, and am happy to see it taking root in the U.S.) also does something useful with its sandwiches. Thanks!