Should Mexican Drug Cartels Be Labeled as Insurgents? 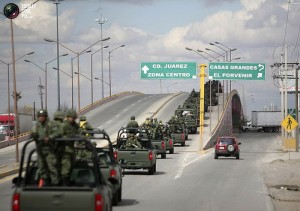 A few weeks ago, Freakonomics received an email from a man in Mexico City describing the effects of Mexican drug cartel violence on daily life and asking for our solutions to his country’s seemingly endless crime problems. This week, The New York Times ran a piece on Mexican drug cartels and growing American infiltration of criminal organizations. Now, a new report from RAND on drug-trafficking violence in Mexico analyzes the situation in the context of an insurgency, bringing to bear research on defense-sector reform.

What’s clear is that the drug-fueled violence in Mexico has diversified over the last decade into several other underworld activities: human trafficking, weapon trafficking, and assassinations, just to name a few. In other words, the cartels are no longer just cartels — they are something larger.

The RAND paper reiterates many points that have become familiar to us about the situation in Mexico: corruption is rife, policing is weak. It also looks at how high unemployment and a “youth bulge” have helped fuel Violent Drug Trafficking Organizations (VDTO). For many young unemployed people, joining a crime syndicate is often the best job option. But the most jarring part of the paper is the discussion and comparison of Mexican drug violence to other insurgency trends around the world. Rather than a war on crime, what if the battle with cartels is really a battle with different insurgent groups? The authors write in their summary:

The goal of this study was not to determine whether the current situation in Mexico should be categorized as an insurgency. Instead, without entering that contentious debate, the study considered the extent to which the factors currently present in Mexico make it appear similar to historical insurgencies. If Mexico were viewed as facing an insurgency (counterfactually or otherwise), how would it compare to historical insurgencies? The RAND Counterinsurgency (COIN) Scorecard assessment found that Mexican drug violence shares some characteristics with historical cases of insurgencies and that Mexican counterdrug efforts share some characteristics with historical COIN efforts around the world.

RAND found that Mexico falls right in the middle of countries that have defeated insurgencies (winners) and countries that haven’t (losers). Winners include Sierra Leone, Croatia and Turkey. Losers include Afghanistan, Rwanda and Sudan. The authors are careful to point out that it’s unclear whether cartels can be considered an insurgency, but the very comparison raises an interesting point about the level and scale of violence that we’ve witnessed over the past few years. Between 30,000 and 40,000 people were murdered in cartel violence between December 2006 and December 2010.

The RAND researchers used the Delphi Method to ask experts specific questions about widespread Mexican violence. In essence, experts individually answered the questions but had the opportunity to see other people’s answers and revise their own. Participants included people with a research background in Mexico, COIN or the defense sector. The authors address the problematic nature of the term “insurgency” as they describe the different ways people reacted to the questions and the hard-to-pin-down nature of Mexico’s crime identity today. They write:

Some participants asserted that several of the scorecard factors do not apply in Mexico or mean something different in the case of Mexico. These claims highlight interesting aspects of the Mexico- specific context. For example, the Urban Flashpoints Scorecard contains a question that asks whether the city being considered is part of a “contested homeland” or “indivisible territory.” The panelists recognized that this question is aimed at ethnonationalist issues that have plagued other countries but are not present in Mexico. However, several experts made compelling arguments that territorial contestation plays a critical role in understanding the contemporary violence in Mexico, because competing VDTOs contest control of the various smuggling routes and attempt to establish “zones of impunity” against the influence of the state.

Certainly, it is crucial to recognize the difference between Mexican cartels and traditional insurgencies — conflating the two completely is irresponsible and dangerous. And even when viewed in the insurgency context, Mexico’s future remains undetermined; the country falls right in the middle of the win-lose spectrum. Then again, even after thousands of casualties, Mexico remains in the “first stage” of the battle — and recognizing the nature and extent of neo-drug traffickers is crucial to winning the war.