The Disadvantages of Summer Babies

A new report from the Institute of Fiscal Studies in the U.K. examines the big difference that a few months can make in the student achievement of young children. Authors Claire Crawford, Lorraine Dearden and Ellen Greaves found (along with several previous studies, like this one and this one) that children born in summer months generally score lower on standardized tests and are seen as “underachievers;” while children born in September and autumn months are more academically and socially successful. From a press release about the study:

Previous research published by the Institute for Fiscal Studies (IFS) has shown that children born at the start of the academic year achieve better exam results, on average, than children born at the end of the academic year. In England, this means that children born in the autumn tend to outperform those born in the summer. New research published today by IFS, and funded by the Nuffield Foundation, shows that month of birth also matters for other characteristics and outcomes of young people growing up in England today. 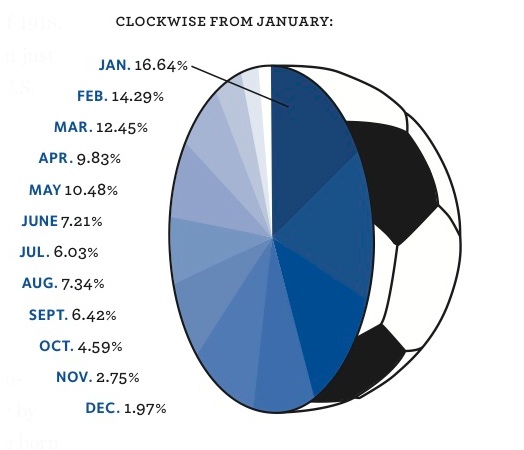 The idea that small age gaps can have big impacts is nothing new. In fact, it’s something we write about in Superfreakonomics, with the birthday breakdown of European soccer players: 43 percent of players were born in the first thee months of the year, while only 9 percent were born in the final three months. Children who are a few months older than their peers at 5 or 6 have more developed cognitive and motor skills, which makes them more advanced athletes and students. This early advantage can lead to self-fulfilling prophecies later on: the child thinks she is an underachiever, and so will often play that role.

Co-author Ellen Greaves states:  “…the government should be concerned about the wider educational experience of summer-born children, who appear to be at a disadvantage in terms of their well-being as well as their test scores.”

Elder and Lubotsky (Journal of Human Resources, 2009) also find that children with older classmates are more likely to be diagnosed with learning disabilities and ADHD than their peers. This is exacerbated by the practice of "redshirting" kindergarteners, in which more affluent parents who either need no child care or can pay for an additional year of private pre-K choose to hold their children back.

Does that mean they can practice with the regular Kindergarten class, but not participate in any tests or competitions?

What about people in the southern hemisphere? We have different dates to strart the school year, as well as reversed seasons. Maybe there is some interesting information to be found by analyzing the differences between both hemispheres

Following the logic of summer babies being bullied, etc. because they are younger and less developed, shouldn't autumn babies be even worse off? Shouldn't it be autumn babies that are struggling instead of excelling as it says at the beginning?

Yeah I am also a bit confused. Summer children will tend to be the oldest in any classroom as the cutoff date is in September or October for entry into school.

the cut off date in NY is December 1.

Isn't this more of a statement on how more care needs to be taken on how and when kids are grouped into categories? Isn't 7 years old awfully young for teachers to be applying labels like "below average"? Seems like we could negate some of these problems if we would wait to divide the kids up until the age and developmental differences are minimized, like middle school.

If the education system waited until middle school to divide kids it would be far too late (for that kid and everyone else in the class). If someone has a 60 IQ at 7, its unlikely to be higher at 12. But if you waited until middle school to place that student in a separate category, he or she wouldn't be receiving the attention needed to improve and other students in the class would likely be held back by their performance.

Its not really the education system "grouping" these kids. If teachers didn't categorize these students, their peers would. The answer isn't "lets not categorize kids." The answer is for parents to wait until their kids are at least on level with their peers before sending them to school (developmentally, intellectually, emotionally, etc.).

My mother, who has a MA in special education / child development and been in the field for 25+ years, has always told people with kids born in the summer to wait until their child was 5 (rather than 4) for school. Based off of her anecdotal experience and obvious differences in development speed, boys are more in danger than their female counterparts of falling behind.

Having a child close to the end of the year also has significant tax advantages so people who plan their parenthood properly will shoot for a delivery date between October and December.

plan their parenthood properly? you've got to be kidding me

Ok that makes more sense. Where I live in Canada the cutoff is Dec 31 (at least when I was a kid) so that's why I was confused.

Don't agree with this study at all...our 7 year old daughter is a summer baby....and has excelled in school since day one. It's about parenting, people. Not what month your child was born in. Take some responsibility. Even with the 'disadvantages' of being a girl & a may baby, she is happy, loves school, participates in class, and is already in 'young scholars' for academic excellence. I was a 'fall' baby-mid sept, and the absolute youngest in my class. I couldn't get my DL till my SR year of HS. 17 when I started University! Tell me that's 'easier' for kids, BS. And yet, I excelled, even being the 'baby' of the class, because my PARENTS believed in and pushed me. Parenting will affect your child more than age, performance, other students, or teachers.