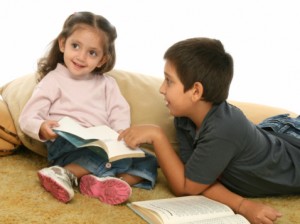 A new study (PDF here) by University of Notre Dame economist Kasey Buckles and graduate student Elizabeth Munnich finds that siblings spaced more than two years apart have higher reading and math scores than children born closer together. The positive effects were seen only in older siblings, not in younger ones.

The authors attribute at least part of the difference to older children getting more of their parents’ time during the first formative years of their lives before a younger sibling comes along. The paper is set to be published in an upcoming issue of the Journal of Human Resources.

This paper investigates the effect of the age difference between siblings (spacing) on  educational achievement. We use a sample of women from the 1979 NLSY, matched to reading  and math scores for their children from the NLSY79 Children and Young Adults Survey. OLS  results suggest that greater spacing is positively associated with test scores for older siblings, but not for younger siblings.  However, because we are concerned that spacing may be correlated  with unobservable characteristics, we also use an instrumental variables strategy that exploits  variation in spacing driven by miscarriages that occur between two live births. The IV results  indicate that a one-year increase in spacing increases test scores for older siblings by about 0.17  standard deviations—an effect comparable to estimates of the effect of birth order.  Especially close spacing (less than two years) decreases scores by 0.65 SD.  These results are larger than the OLS estimates, suggesting that estimates that fail to account for the endogeneity of spacing may understate its benefits.  For younger siblings, there appears to be no causal impact of spacing on test scores.

The paper fills in one of the few remaining gaps in the large body of economic research that’s been done on family structure and children’s outcomes. We already know that children from larger families generally have lower educational attainment and IQ scores, worse employment outcomes, and are more likely to engage in risky behavior. But birth spacing has received less attention.

The authors sampled a nationally representative panel of 12,686 young people ages 14 to 22 in 1979 and their children, and used  the Peabody Individual Achievement Tests for math and reading to measure performance. The largest effect they observed suggested that a one-year increase in spacing improves reading scores for older children by 0.17 SD—which would be three times the effect of increasing annual family income by $1,000.

it seems conceivable to me that having a miscarriage is causal.

i.e. if parents lose a pregnancy they might take better care, invest more in education etc of existing children.

I have to wonder if the causality goes the other way. We know that better-off families have fewer kids, and that family economic status influences child IQ. It seems entirely plausible that better off and/or higher IQ families tend to space their kids more, which is easier to do if you're going to have 2 than if you're going to have 5. So the effect could be entirely genetic and not environmental, or at least not related to birth spacing in particular.

Of course, I'm too lazy to actually rtfa and find out if they considered this.

It was unclear whether they accounted for spacing plus fewer children.

If a family has only 2 children born close together, is there much difference between them and a 2 person family with larger spacing?

It would be an invalid comparison to take a 2 child family with good spacing and a 5 or 6 child family where some of the spacing will be closer together.

Umm isn't this research like 20 years old? I remember talking about this effect in high school 15 years ago. I am sure I read about it in Discover or Scientific American in the early 90s.

The research from back then was pretty conclusive that average mental age of playmates was a big factor in educational attainment.

Older siblings and only children did better the longer they were alone because they had more time where their main source of social interaction was an adult. Younger siblings underperformed because they spent a lot of time with their older siblings instead of adults.

This spacing angle is only slightly different than that information and is exactly what you would expect.

Except that this research seems to be showing that the OLDER sibling is underperforming due to having a younger sibling that is close in age.
--
JimFive

Its the same effect. Average age of playmates. The older siblings average playmate age goes down when they have a sibling. The longer you can put that off the better (for the measures they measure).

It is just even worse for the younger siblings because they never have that period where their main interactions are with adults. They are always interacting with children.

Another way to summarize the article could be: Want Smarter Kids? Spend lots of time with them: talk to them, love them, eat meals with them, teach them, read to them, and challenge them. Oh yeah, and having fewer kids at a slower pace may help you do that.

No way the causality flows the way the title implies. Ok, so we know the lower bound of sibling age difference is 9 months, but in practice that nearly impossible due to the physical trauma on the mother's body. Not a lot of sexytime happening there for a month or two after a baby is born.

The confounding variable, though, is breastfeeding. As long as a woman is breastfeeding, it is hormonally nearly impossible for her to get pregnant again. There's a fair amount of evidence supporting the importance of breastfeeding to development. But also, what kind of mother breastfeeds for a year or more after her baby is born? I'm going to speculate that she is more likely to be educated, and to be spending a lot of time interacting with her kids.

I swear almost every one of these purported "smart kids" correlations comes back to the parents as a confounding factor.

"As long as a woman is breastfeeding, it is hormonally nearly impossible for her to get pregnant again."

Exclusive, on-demand breastfeeding (meaning no formula at all and preferably no pacifier either) is about 80% effective at preventing pregnancy, which is not the same as nearly impossible. It's also quite difficult for many women to maintain. I'm not sure of the numbers once the baby is eating other foods, but it's close to normal fertility levels.

I've been breastfeeding for the last two years, and have had my period for about 16 months of that.

I wonder how this study correlates with the research presented in the Freakonomics article on how parents have little to no effect on the success of their children.

Have the accounted for the fact that children closer than two years are more likely to be unplanned. Which may correlate to education levels of the mother.

to be fair to the authors miscarriage is quite a good way of controlling (admittedly not completely randomly) for spacing. it shows people wanted to space children less and were involuntary given a larger than desired gap between children.

the problem i see is that miscarriage is likely to be a significant event for the family that has effects of its own on children and parents.

it isn't surprising that spending time with your children is good for the children. it is however surprisingly hard to demonstrate that it is causal rather than due to parent education.

It sounds like they haven't considered the effects that the kids have directly on each other. (I'll bet that none of the authors have personal experience with large families.)

Okay: We all say that the best way to learn something is to teach it, right?

And what does a typical preschooler do? He spends some time "teaching" the baby.

This is often "unimportant" stuff, like "teaching" the baby to laugh, but it's hugely important from the perspective of cognitive development. To "teach" the baby to laugh, you have to formulate a plan, choose when to implement it, notice the reaction, evaluate whether it worked, and either refine your plan (perhaps incorporating information from other sources) or repeat it ("practice" the skill).

You additionally have to sort out confounding factors: Did the baby ignore me when I did my trick because she's busy or almost asleep? Did she cry rather than laugh because I startled her or because she's hungry or needs something? In other words, does a one-time failure mean that my trick doesn't work at all, or does it mean that I need to improve my timing?

This is fundamentally the same skill set that stand-up comedians struggle with (and anyone asking for a pay raise). Of course spending even a few minutes most days doing this "unimportant" but highly complex cognitive task is going to improve these kids' mental abilities.

Parents have no lasting effect on how kids turn out.
So this article and any other articles putting nurturing assumptions as basis are false.

Would be interesting to see a study that compared the achievement of only children with the oldest child in multi-child households to discern what happens if that second sibling never comes along? Wonder if there is a spacing for that second sibling where the achievement of the eldest child is equal to that of an only child (i.e., there ceases to be a disadvantage to having younger siblings and perhaps even a developmental advantage).

Another research that confuses correlation with causality. If kids born within a close gap of each other are less smarter, I wonder what happens to twins or triplets.

It is more to do with how much time parents spend with their kids, how much they focus on the child's development and also on how smart the parents themselves are.

And parents who are smart themselves and also spend a lot of time with their kids, teaching them math, reading, etc. and in general, investing time in their kids are more likely to have less kids who are more spaced out!