Does Democracy Make Us Richer and Better Educated? Or Is It the Other Way Around?

It’s one of the ultimate chicken or egg questions: Does democracy lead to increases in education and income, or do education and higher income lead to democracy? It’s a tricky one, considering that over the last 200 years, they’ve essentially moved in tandem across much of the developed world. Seen here in the chart below: 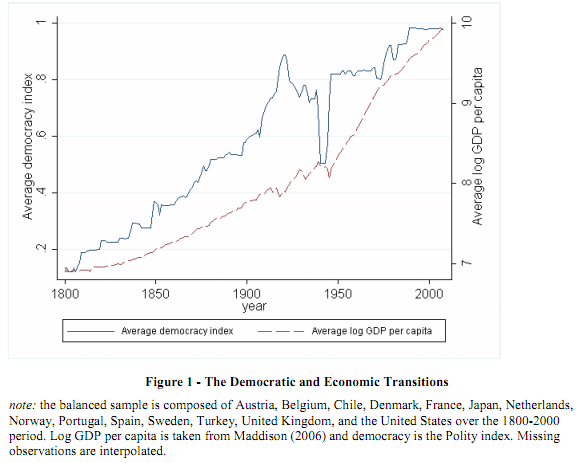 So which is affecting which? A new working paper (full version here) by Fabrice Murtin and Romain Wacziarg attempts to untangle the two to understand whether democracy grows from education and higher income, or vice versa. Their essential question is: “Does education help raise the quality of institutions as well as productivity, or is an efficient institutional framework a prerequisite for expanding education levels and economic growth?”

Using a data set going back to 1870, with statistics from 70 countries, they conclude that education (particularly increases in primary schooling) and, to a lesser extent, per capita income levels, are strong determinants of the quality of political institutions – not the other way around. So education and income first, democracy second.

Over the last two centuries, many countries experienced regime transitions toward democracy. We document this democratic transition over a long time horizon. We use historical time series of income, education and democracy levels from 1870 to 2000 to explore the economic factors associated with rising levels of democracy. We find that primary schooling, and to a weaker extent per capita income levels, are strong determinants of the quality of political institutions. We find little evidence of causality running the other way, from democracy to income or education.

Their findings re-affirm what Joseph Schumpeter declared in his 1942 book, Capitalism, Socialism and Democracy: “Modern  democracy is a product of the capitalist process.” And which political sociologist Seymour Lipset, popularized as the theory of modernization: “[T]he more well-to-do a nation, the greater the chances that it will sustain democracy.”

The authors argue that primary schooling has been a “major trigger” of the democratic transition over 1870-2000, more so than GDP growth. Without getting bogged down in the specifics of their regression analysis, or their use of “modern dynamic panel estimation methods,” I’ll simply post two of graphs that illustrate their point that education is a stronger determinant for democracy than economic growth: 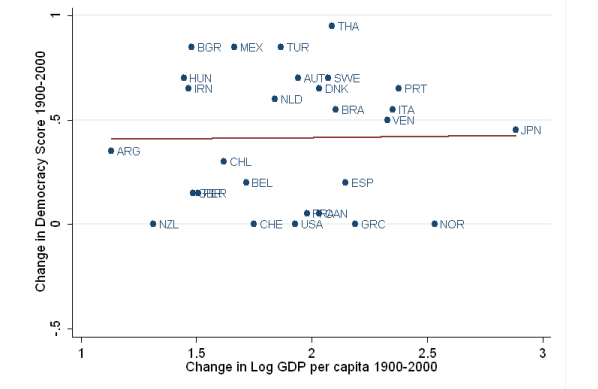 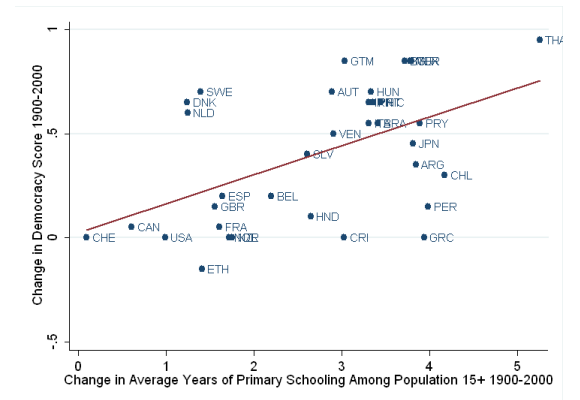 So, now that Egypt is less than a month away from its first elections, is there evidence of these findings in the recent events there? It would seem so, considering the advances Egypt has made in education over the last few decades. In 1980, the youth literacy rate (ages 15-24) in Egypt was 52 percent. By 2008, (according to UNICEF) 88 percent of males aged 15 to 24 were literate, while their female counterparts were 82 percent literate. Egypt’s economic development paints a muddier picture. Despite decent economic growth, poverty rates remained stubbornly high as GDP per capita growth lagged behind its regional neighbors.