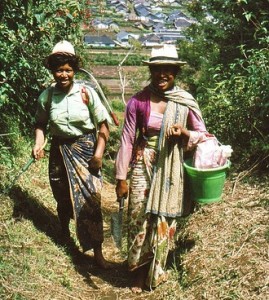 Conventional wisdom holds that instituting or raising the minimum wage will increase unemployment. But a recent paper by Jeremy Magruder, an economist at Berkeley, finds the opposite effect. Magruder examines the case of Indonesia in the 1990s, “where real minimum wages rose rapidly in a varied way and then dropped quickly with the inflation rate in the South East Asian financial crash.” Here’s an excerpt:

When minimum wages rose in one district relative to their neighbors, that district observed an increase in formal sector employment and a decrease in informal employment. It also observed an increase in local expenditures, which is consistent with the hypothesized mechanism of the big push: that local product demand increases labor demand. Moreover, this increase was only observed in local industries which can be industrialized and do supply local demand, supporting the model further. Tradable manufacturing firms saw no growth in employment, and un-tradable, but non-industrializable services saw an increase in informal employment.

Of course, few modern-day economists argue that an increase in the minimum wage will actually create jobs in America, and such policies failed dismally during the Great Depression. Magruder explains why the policy may have worked in Indonesia, but not in Depression-era America:

One, as a less-developed country receiving substantial foreign investment, Indonesia may have had new access to potential, unadopted, and profitable technologies that simply needed a market. A second is that much of the 1990s were a time of growth in Indonesia, when sticky wages may have limited wage growth (the opposite of conditions in the depression). Finally, Harrison and Scorce (2010) show that anti-sweatshop activism also raised labor standards in foreign firms without an accompanying drop in employment. This indicates that wages may have indeed been below marginal products in the 1990s, reducing coordination and creating an opening for policy.