Lessons in Anchoring and Framing From … George Clooney?

In a Time magazine Q&A, the actor gives a fascinating reply to the question “Are you disappointed in Obama?”:

I get angry at people who don’t stand for him, actually. If this were a Republican president, Republicans would say, “We were losing 400,000 jobs a month. We stopped it. We saved the car industry.” You could go down the list. Democrats should talk to Hollywood about how to posture some of these things. Say you’re about to get into tax loopholes. Instead of “loopholes,” say “cheating.” And then on the floor of the Senate, get up and say, “We’re not going to raise your taxes, but we’re not for cheating. Are you?” I just think Democrats are bad at that.

A few points: I assume the “people” he gets angry at for not standing for Obama are Democrats? If not … well … hard to imagine someone like Clooney getting angry at Democrats who didn’t “stand for” Bush. 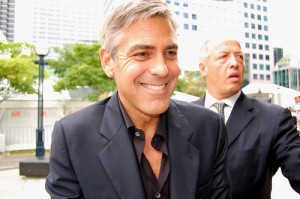 Great point re the job loss and car industry! Perhaps not nearly 100 percent accurate, but still, a great point re how those accomplishments haven’t been framed as successes.

Should Democrats really “talk to Hollywood” about how to “posture” these things? My sense is that Hollywood is good at fleshing out fantasies and unrealistic narratives that we want to be realistic; to me, this is a different skill set than advantageously using framing and anchoring techniques.

But, on that last point — maybe I’m wrong! Because if Clooney can be said to represent “Hollywood,” then his take on the “loopholes” vs. “cheating” is as smart as anything any political consultant says.

Here’s the big question: are Democrats really just “bad at that” — i.e., using framing, anchoring, and loaded language to their advantage? I hear this meme more and more these days, including in a recent interview I did with Times editorial-page editor Andy Rosenthal for an upcoming radio program on media bias. Rosenthal, like Clooney, argues that Democrats are simply bad at fighting back against Republican efforts on something as simple as the “estate tax” vs. “death tax” argument. It’s not clear to me whether Democrats are supposed to be bad because they take the higher moral ground and refuse to roll in mud like this, or that they don’t have enough of a mean streak, or whatnot. But does anyone else here find this to be argument viable? Out of all the Democrats in the country, is there really no one who understands and is willing to successfully use framing, anchoring, and language tricks?