The Economic Battlefield of the NBA Lockout

The following is a guest post by David Berri, a Professor of Economics at Southern Utah University. He is also the lead author of Stumbling on Wins, the general manager of the sports-economics blog Wages of Wins, and is a frequent contributor to the Freakonomics blog.

Monopsony vs. Monopoly: The Economic Battlefield of the NBA Lockout
By David Berri

With the NBA away, sports fans are looking for something to satisfy their need to watch teams strive for victory.  Well, why not take a look at the teams competing in the lockout?

Okay, maybe this is a contest only a sports economist could love. But while it may not appeal to everyone, the labor dispute is still best thought of as a contest between two teams. 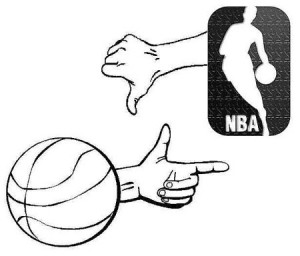 The first team is the NBA owners. The owners are the dominant buyer in the world market for elite basketball talent, so they have substantial monopsony power. In the other corner are the players, who are currently trying to disband their union. This union gave the players monopoly power in the sale of elite basketball talent (more specifically, in helping to determine the conditions under which individual players would sell their services). When a monopsony meets a monopoly on the economic battlefield, the outcome is determined by bargaining. And in that case, bargaining power – or what we call leverage – means everything.

At the onset of the lockout, the leverage was with the owners. This is primarily because the money made in basketball comes at different times for the owners and the players. The players are paid for the regular season, and receive regular paychecks throughout the season. So once regular season games are lost, the players start losing money.

So this past summer, the owners were willing to hold out for a better deal. The players were much more anxious to reach a deal before paychecks were lost forever. This gave the owners an advantage over the summer.

Given the disparity in bargaining power, we should not be surprised that the owners have “won.” The game’s not over yet, but given the final offers we have seen from both the players and the owners, we know that even if the owners accepted the players’ last offer, the owners would be doing better than they did after the last Collective Bargaining Agreement (an agreement the owners seemed quite happy to accept a few years ago).

Although the outcome seems determined, there’s still time on the clock. And the owners are looking to run up the score by increasing their margin of victory. To fully understand that move, we need to understand that the owners’ team consists of two players: large market teams and small market teams. No one disputes the notion that the large market teams – in places like Los Angeles, New York, and Chicago – are doing quite well. In contrast, teams located in places like Charlotte, Memphis, and Indianapolis are not doing as well. This had led the small market teams to ask for more money from somebody.

Such a move reminds one of a similar contest in baseball in 2002.  About ten years ago, Major League Baseball claimed most teams were losing money and that the players needed to make concessions in the name of competitive balance. Does that sound familiar?  Yes, it is the same argument we hear from NBA owners today.

Well, the owners in baseball didn’t get everything they asked for in 2002. What they did get was about a billion dollars moving from high-revenue teams (i.e. the Yankees) to low revenue teams (like the Pirates). Theoretically, this money was supposed to allow the Pirates to purchase better talent. In practice, this money didn’t seem to get spent on players, but it did allow the Pirates – one of the worst teams in professional sports in North America — to turn a profit. Regardless of how the Pirates spent the money, it is clear the 2002 labor dispute was not entirely a contest between the players and the owners. The most important combatants were the small market and large market teams.

Ten years later, the competitive balance in baseball hasn’t really changed. And the players in baseball are still not subject to a salary cap or a luxury tax which would prevent the Yankees from dramatically outspending everyone else in baseball. But with money flowing from New York to places like Pittsburgh, baseball now has labor peace.

One suspects the story in the NBA will eventually play out in the same fashion. Here is how I see the play-by-play so far:

This last move by the players is designed to give them some leverage. And so that puts the ball back in the court of the large market teams. Will they step up and bail out the little guys, as the Yankees did back in 2002?  Or will the big guys insist the players transfer even more money to the small market teams?

Let me close by noting that just as we saw in baseball, none of this is about the fans. Yes the owners in the NBA claim – just as baseball claimed 10 years ago – that this is all about competitive balance. Unfortunately, there is simply no evidence that competitive balance is changed dramatically by luxury taxes and salary caps. In other words, this deal is not going to be something that will transform the Charlotte Bobcats into title contenders (especially with Michael Jordan calling the shots in Charlotte).

Furthermore, after the final agreement is in place and the players start collecting less money, do not expect your ticket prices to go down. Ticket prices in sports are driven by demand. Martin Schmidt and I have published research that indicates that demand will not be impacted by this labor dispute, and so ticket prices probably will not be changed much going forward. In other words, regardless of how this contest is eventually decided, fans are just going to have to be happy watching pro basketball again.