Why Does the Worldwide Financial Crisis Fester So? 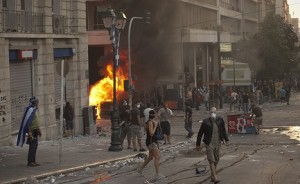 It has been two years since the flames were first spotted in Greece, yet the blaze still hasn’t been put out. Now it has spread to Italy.

It’s been five years since the U.S. housing bubble burst. Housing remains among the biggest reasons the U.S. economy is doing so poorly.

On both continents, there is no longer any doubt about the severity of the threat or the urgent need for better policies. Yet the players seem spectacularly unable to act.

And then he offers a compelling answer:

Deciding who will get stuck with the tab.

“In every crisis, you have to allocate the losses between debtors, creditors and taxpayers,” says Anna Gelpern, an American University law professor and former Treasury official. “It’s a shockingly simple concept, and completely intractable.”

“By definition, it’s a political problem,” she adds. “Even if you came up with an optimal allocation, if it’s not politically salable, it can’t happen.”

Most people agree by now that our political structures are too incapable and/or impotent to a) responsibly address a crisis of this nature; and b) help create a framework that would prevent future crises.

To my mind, much of the trouble lies in how politicians’ incentives are badly misaligned: they are rewarded for short-term, self-interested activities (raising money, getting re-elected, coming down on the right side of short-term public opinion) while the goals the public really wants accomplished are long-term, public-interest works (which have almost nothing to do with raising money, electing politicians, or getting a good headline).

I have some inchoate ideas for how to address this incentive gap — to be framed out and written about here someday, hopefully — but I’m wondering what you all think of this politician-incentive problem and possible solutions to it?